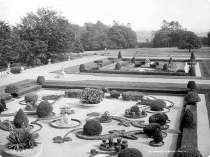 The Winter Garden was designed as a sunken area to provide year round interest. Its formal nature also provided a contrast with the natural parkland around it. The sunken nature of the site allowed the viewer to look down as well as across the site. The garden itself consisted of a series of clipped and shaped plants planted in intricate patterns. The beds were surrounded by coloured gravels and cast-iron urns to provide year round interest. These complex patterns are known as 'parterres'. They were particularly popular in France and became a feature of estates in the British Isles. They were by their nature staff intensive.

At Woodstock, hedging and topiary plants included Box, various Laurels, Cotton Lavender and Butcher's Broom. Some of the motifs used included the Shamrock and Scrolling Work. The shapes inside the clipped plants were filled with coloured gravels obtained on the estate.

Little of the planting remains, what was left was cleared for a Scout Jamboree in the 1970's. At the moment restoration of the original parterres is on going.

Previous - The Silver Fir Walk
Next - The Yew Walk