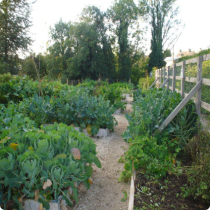 Rinn na Cearta allotments in Ballyfarnon, County Roscommon, were one of three highly commended awardees of the Comhar SDC Sustainable Development Award, which is a special award under TidyTowns

Rinn na Cearta allotments in Ballyfarnon, County Roscommon, were one of three highly commended awardees of the Comhar SDC Sustainable Development Award, which is a special award under TidyTowns

Rinn na Cearta allotments in Ballyfarnon, County Roscommon, were one of three highly commended awardees of the Comhar SDC Sustainable Development Award, which is a special award under TidyTowns. The award recognises communities that are putting Sustainable Development principles into practice.
Rinn na Cearta allotments were established in 2009 on an area previously considered to be waste ground to the rear of Rinn na Cearta Housing estate. The allotments are situated between the houses and the banks of the Feorish River. The estate consists of seven town houses with very small gardens. The residents welcomed the opportunity to create something from the space. The land was hard to manage; but the space is now looked after by local residents improving sense of community and civic responsibility.

The TidyTown group in Ballyfarnon secured funding from the Local Agenda 21 Environmental Partnership Fund through Roscommon County Council in 2009. With the financial side taken care of the group began recruiting volunteers and planning for the project. Four of the households got involved. The land was fenced off for safety and work began. Other people in the community were invaluable in making the project work. A local handy man made composters and supplied and hung a gate. A local builder supplied scaffolding planks to use for raised beds. The residents then made the raised beds and created paths around each bed for safety and comfort when working. The group share a wheel barrow. They also bought a hose and two houses supply the water to the allotments. The residents drafted and signed an agreement to use the bed for a year. 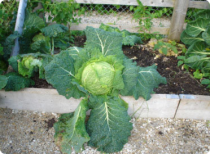 By July of 2009 the Allotment area was all used up and a wonderful harvest yield was returned. There were large heads of cabbage, potatoes, carrots, parsnips, turnip, radishes, onions, leeks and salads. One of the greatest outcomes of the allotments was the social interactions that it encouraged. Neighbours chatted, worked alongside each other, shared ideas, helped each other out, for example by watering and weeding, and swapped their harvest and cooking tips.
During the winter months, the group will rest the allotments and will organise some cookery demonstrations in the Community Centre called ‘Come Cook With Us’. Each allotment holder will get a chance to share their recipes using their produce. One of the allotment holders will do a survey over winter, observing all wildlife in the allotment area and riverbank.
The group have made up a raised bed at the local school as a pilot scheme. Mary Shivnan showed the school children how to set seeds and transplant seedlings. The children in both the estate and the school have been keeping a garden diary and photo record. They will complete a habitat study and use the information to protect and enhance wildlife in the area.

Rinn na Cearta will use the money won from the TidyTown award to make covers for the beds. In the future, they hope to secure funding for a small shed and for a water butt. The group will set up a market stall next year where they can sell surplus and invest proceeds in allotments.

The allotments have been a resounding success and demonstrate the impact that a small group can have on its locality. Some of the important lessons from this project include;

• Get co-operation from residents/ community in principle, and as much voluntary labour as possible.
• Work under the umbrella of an existing community group where possible. This takes care of secretary, treasurer, general accountability and insurance. It is also valuable in securing funding as established groups will be familiar with applications and will have a proven track record.