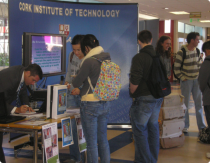 Headed up by Dr. Mary Purcell and the Buildings & Estates office at CIT, with support from the Clean Technology Centre, Green Campus CIT aims at establishing a sustainable campus programme at its Bishopstown Campus at Cork Institute of Technology. The project funded under the EPA’s Cleaner Greener Production Programme (CGPP) branded ‘Green Campus CIT’ is making great strides at Greening the campus.
The programme is resulting in both economic and environmental benefits, where spends on electricity significantly reduced in 2010. A new waste management system has been implemented at CIT aimed at waste prevention and improved recycling. The CIT Energy Focus also continues on campus with people asked to ‘Switch off – Plug out’ electrical equipment when not in use. 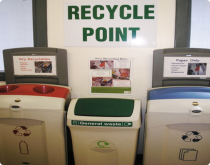 CIT sent less waste to Landfill (30% less) and recovery rates jumped from 28% to 55.5%, as of October 2010. CIT has seen a reduction of more than 7% in overall waste generation despite the increase in student numbers on campus. CIT are definitely moving in the right direction with the new waste management system introduced. Recycling bins have been deployed across campus. A three bin system is in place where paper, dry recyclables and general waste can be separated. Around the canteen areas a separate food waste bin is also provided.
As part of a food waste reduction programme at Tourism & Hospitality, food cooked in the department is sold to staff and students in fully compostable packaging. Tourism & Hospitality are also tracking the waste generated form unused food in practical classes and we will calculate the overall cost of this including disposal costs. 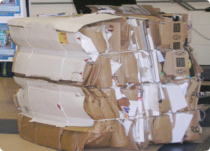 A bale of cardboard, ready to be recycled

A bale of cardboard, ready to be recycled

The Waste Awareness day at CIT held on the 12th October 2010 was a great success in raising the profile of waste management at CIT. The stand was kept busy for the day with students and staff visiting the stand with questions and comments. 218 entries were received for the competition ‘guess the weight’ of a bale of cardboard on display in the Foyer.

Electricity usage on campus (on a meter squared basis) has seen a reduction of more than 8.5% per meter squared area. Significant savings on electricity spends has meant that the first 9 months of 2010 resulted in more than €268,000 savings compared to the same period in 2009.
CIT’s Energy Focus is documenting individual buildings energy usage and also analysing sub meter energy usage. An Electrical Vehicle (EV) point has been installed on campus at CIT. The EV point was formally launched on 18th October 2010 by Dr. Brendan Murphy, CIT President and Mr. Paul Mulvaney of ESB ecars. Representatives from the Buildings & Estates and Green Campus CIT as well as other interested parties attended the official launch and presentation by Mr. Paul Mulvaney. This is another first for CIT, who continue to lead the way in environmental management on campus. 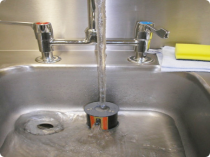 In October 2010, a water usage optimization plan was being drawn up at CIT. Various works have taken place across campus to help reduce the water usage. Flow restrictors have been installed on all the taps in the Tourism & Hospitality Building bringing the flow rates back from 32 liters per minute to an average of 7 liters per minute. This activity alone will result in substantial savings in water use at CIT.
A waterless urinal product is on trial in the Tourism & Hospitality building as well as in B block (B144). An investigation into sensors for urinals is also being conducted to help reduce the water usage in urinals. The water metering system is currently being upgraded.