Duncan Stewart and the Eco-eye crew visited CIT on the 20th October 2010 to discuss the Green Campus CIT project and hear about some of the works carried out by the Clean Technology Centre. 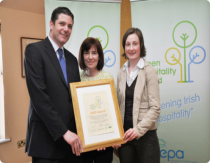 CIT communicates its efforts with stakeholders through: