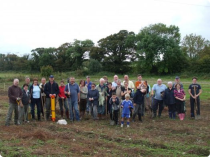 Participants of the Sustainable Skerries group who are working towards a more resilient and sustainable community.

Participants of the Sustainable Skerries group who are working towards a more resilient and sustainable community.

Sustainable Skerries is a Transition Town initiative set up by local people to work towards a more sustainable and resilient community. Sustainable Skerries are working on a campaign to highlight issues around peak oil and climate change and their consequences for Skerries. The community is focusing on several issues, such as local energy conservation and renewable power generation, food issues such as allotments, food security and food miles, transportation issues effecting Skerries and re-skilling the community.

Sustainable Skerries in partnership with Fingal County Council are establishing their own unique allotments with in walking distance of the town. Over 150 allotments (both organic, transitional and non-organic) will give people in Skerries the chance to grow their own food in a community of fellow gardeners. Skerries Allotment Association (a working group of Sustainable Skerries) considers this type of project to be an excellent example of Local Authority and Local Community acting together to create a sustainable and resilient allotment scheme which could be held up as an example throughout the country.

They are already proving to be very popular, with over 130 locals signed up to them. Work parties have been held at the allotments every Saturday since August, where volunteers who have signed up to have an allotment are assisting to clear the land, survey the plots, mark-out the land and make the inter-leading pathways.

Food growing is proving to be an exciting and engaging way to bring the community together while addressing sustainability issues. Sustainable Skerries are currently bringing this further through the  introduction of a Community Supported Agriculture (CSA) scheme. This project called Community Harvest Group - Skerries is a partnership between the local people and a local organic grower Paddy Byrne. Members will pay a weekly fee and in return will receive a weekly box of locally grown and seasonal vegetables, as well as other produce such as eggs. The range of vegetables that will be available as per the season include potatoes, carrots, parsnips, onions, scallions, broccoli, cabbage, cauliflower, turnips, beetroot, spinach, chard, lettuce, parsley, radish, tomatoes, peppers, kale, celery, squash pumpkin, courgettes and marrows. There will be two sizes of boxes, which are available at a very reasonable price. The standard box will cater for an average family of 2 adults, 2 children. For smaller households there will be a mini-box which will cater for an equivalent of 2 adults.

Community Supported Agriculture allows everyone access to a locally grown, healthy and resilient fresh food supply. The scheme is also beneficial for the farmer as he will have a secure market for his produce. Members sign an agreement in which they commit to upfront monthly payments. A sub-committee has been established to manage this scheme. Members had an opportunity to meet the farmer and other members at a pubic meeting which was held on the 25 November 2010 at the SailingClub in Skerries at 7.30pm.

Sustainable Skerries is working with Codema on establishing an Energy Smart Community Skerries project, to facilitate people in Skerries to improve the energy efficiency of their homes through better insulation, more efficient heating and lighting and other energy saving measures.

Sustainable Skerries was recently approached by Skerries Community Association to carry out an energy review for the Community Centre and Little Theatre buildings. As part of this project, two members collected information from the Centre relating to their energy, oil and water usage and also visited the Centre to examine the buildings. Sustainable Skerries are assessing their findings, obtaining quotations and will then prepare a report for the Skerries Community Association Board, with recommendations on how the energy, oil and water bills might be reduced in the future.
Sustainable Skerries is investigating the feasibility of an Energy Synergy project which would be unique in Ireland. The project may take the form of wind generators (and / or other renewable energy sources) owned by and operated for the Community. The energy generated may be fed into a micro distribution grid to improve the resilience of the town in times of potential future energy shortages.
The group is working on progressing this idea, gaining public support and looking to establish a pilot project. They have had initial exploratory meetings with Mr Eamon Ryan TD, Minister for Communications, Energy and Natural Resources and with David O’Connor the Fingal County Manager; from whom they received positive feedback encouraging them to pursue the potential of these ideas.