Until the end of May 2010, rainfall in each month since the New Year was between 70% and 85% of average levels, while June 2010 levels were even lower in many parts of Ireland. It makes sense then that drinking water sources are already depleted by as much as one-third and that’s before we take account of the impact of a heatwave and the surge in demand that has followed, much of it for unnecessary recreational use.

Fear of drought conditions has prompted a renewed focus on metering and on a charging system based on water usage. Group water schemes across the country have proven that universal metering allied to realistic charging is the answer.

Where there are no individual meters on connections, it is difficult to control wastefulness. Where there are meters in place, but charges are kept low or the ‘free allocation’ is too large, then we don’t get the full value of metering. Where we have a common sense ‘free allocation’ (based on the principle of providing for essential water use), combined with a ‘realistic charge’ that reflects the cost of water and the need to conserve supplies...we have the answer. 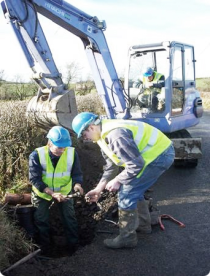 The majority of group schemes have universal metering in place and it is entirely in the hands of their members how they use them. For the small minority of schemes that have yet to install meters, the Department must include them under the provisions of the Water Services Investment Programme announced by Minister John Gormley in April 2010. The payback from this relatively small investment will be immediate in terms of reduced pumping costs, reduced treatment costs and reduced pressure on sources.

Anybody sceptical about the value of such an approach need only look to the actual experience of group water schemes where unaccounted for water has been reduced to less than 10% and average daily household demand is less than one third of a cube.

A County Sligo scheme that was distributing over 300m3 per day, has reduced this to 30m3, while a Galway Group Water Scheme with 150 houses as well as several farms and businesses is distributing less than 40m3 a day!

In both these cases, this success has been down to several factors:

·   a charge per cubic meter that reflects the true cost of the water service.

By contrast, the inspections also demonstrate that those schemes that undervalue their service or are relying solely on a flat-rate charging system cannot get to grips with high daily water demand and pressure on their sources.

Previous - Videos
Next - Waste: Use of ‘Integrated Constructed Wetlands’ (ICW)