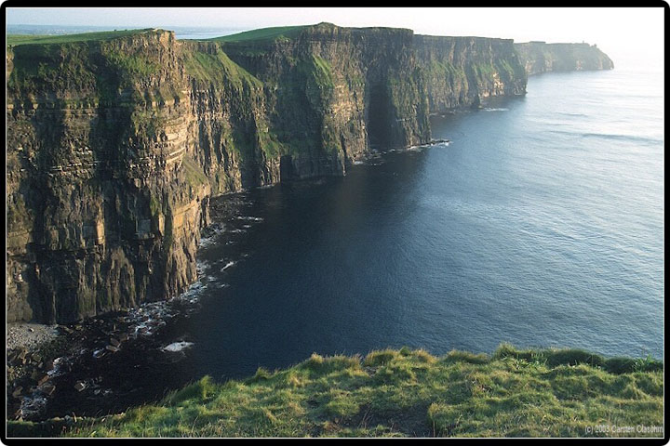 Photograph showing the coastline of the Cliffs of Moher

Photograph showing the coastline of the Cliffs of Moher

Ireland has a varied coastline, but a basic distinction may be made between westerly shores exposed to the full force of the Atlantic Ocean and the more sheltered east coast. Actively eroding cliffs are widespread along the west coast, for example at the famous Cliffs of Moher in Co. Clare and at Croaghaun on Achill Island, Co. Mayo.

The Ulster white limestone along the Antrim coast, overlain by basalt.

The Ulster white limestone along the Antrim coast, overlain by basalt.

Courtesy of the Geological Survey of Ireland 2006.
Enlarge image

At Slieve League in Co. Donegal, the cliffs reach heights of over 600 metres. Along the south coast of Co. Cork lies the spectacular Old Head of Kinsale, where just a thin neck of land now joins the resistant sandstone headland to the 'mainland'.

Active erosion is also taking place at Killiney, Co. Dublin, around Bray Head in Co. Wicklow, and at Blackwater in Co. Wexford (where the soft boulder clay materials along the shore are highly vulnerable). But long beaches also feature along much of the much less indented east coast, most notably along a great stretch that runs from the Raven at Wexford Harbour north to Cahore Point in south Wicklow.

Any statistic for the length of the coastline depends on the detail withwhich it is measured. However, an estimate offered by the Ordnance Survey of Ireland puts the total length around Ireland at 3171 kilometres.

The changing sea-levels shows the detrimental effects clearly on the Portmagee Channel in Kerry.

Slieve League, Co. Donegal has one of the tallest sea cliffs in Europe.

Killiney-Bray Head: A view along the cliff and beach.

The coastline at Killiney beach, Co. Dublin. The cliff is vulnerable to erosion and various efforts have been made to protect the cliff by placing a barrier at its base and by using wire netting. Nonetheless a small part near the notice board recently collapsed. The Dart railway runs close to this cliff. About one hundred years ago, when the rail line between the Shanganagh river and Shankill was threatened by the retreat of the cliff seen here in the middle distance, the rail route had to be relocated inland.

Previous - Bogs
Next - The Formation of the Physical Landscape