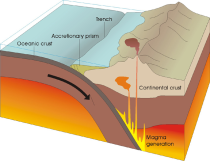 Subduction a part of the Earth’s crust is swallowed and returns to the magma when a dense plate dives under another less dense plate.

Subduction a part of the Earth’s crust is swallowed and returns to the magma when a dense plate dives under another less dense plate.

Figure modified from Michigan University. Source: http://www.geo.lsa.umich.edu.
Enlarge image
Plate tectonics is the name given to the titanic conflicts and rearrangements over hundreds of millions of years between the slow-moving large units or plates, which make up and determine the Earth's 'skin' or crust. At various periods in the past, the Earth's geography has been very different to what it is today. Continents have united and moved apart, and then regrouped in other ways. Oceans have appeared and disappeared. Because of the movements, places that are now part of the present-day continents may once have been at very different latitudes, and may even have been linked to very different areas.

These changes are driven by developments inside the Earth, most notably the uprising of molten magma from deep inside the Earth to or near to, the Earth's surface, and, at other parts of the surface, the sucking down or 'subduction' of old rock back inside the Earth. Magma appears mainly through a series of openings along the ridges that are to be found near the middle of the Earth's oceans. Here new rock is created and pushed outwards from the ridge by sea-floor spreading. In contrast subduction occurs at the great trenches that mark the deepest parts of the oceans.


Studies of plate tectonics tell us that Ireland once had a very different setting within world geography.

In fact some 450 million years ago north-west Ireland belonged to a landmass (Laurentia) that is now mainly represented in North America, whereas the rest of Ireland lay beyond an ocean several thousand miles to the south and belonged to another plate. As the two plates moved toward each other, a mountain-building phase developed that is sometimes known as the Caledonian or Caledonide.

The two parts of Ireland finally merged about 440-400 million years ago when the separating ocean closed and the two plates collided. The impact of that prolonged collision (or series of collisions) is still evident in Ireland today, being expressed in the way mountains over much of the island, particularly the north, display long axes that trend north-east to south-west - a direction that reflects the line along which the plates clashed. 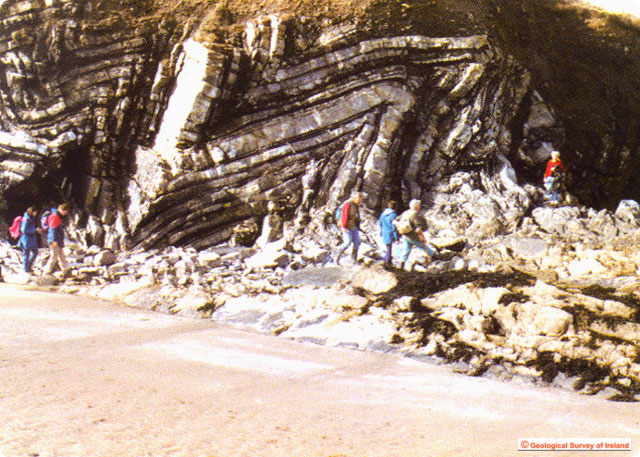 Copyright of the Geological Survey of Ireland 2006.
Enlarge image
In later times the area that is now Ireland moved north, reaching close to the equator by approximately 300-350 million years ago. During a long period, now identified as the Carboniferous (which lasted over 50 million years), the sea extended across Ireland from the south. Initially sandstones, shales and mudstones were formed in shallow seas; then the constituents of what became thick deposits of limestones accumulated in quiet, warm seas similar to the present-day Persian Gulf. Later, after the formation of marine shales and other rocks, these areas became land. In swampy tropical conditions, highly-organic materials which became coal measures accumulated.

During another great mountain-building period, sometimes called the Variscan (but also widely known as the Hercynian or Armorican), pressure came from the south, producing strong folding in the southern part of Ireland. The legacy of this period is now evident in the east-west trending mountains of south Munster, with axes very different to the Caledonide-influenced mountains further north. 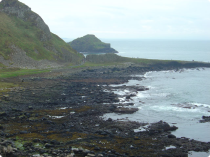 Giant's Causeway and the seashore

This photograph shows the Giant's Causeway situated along the County Antrim coastline.

Giant's Causeway and the seashore

This photograph shows the Giant's Causeway situated along the County Antrim coastline.

Courtesy of Nicola Smith
Enlarge image
Still later, the Atlantic re-opened and widened. About sixty million years ago Ireland experienced the impact of sea-flooring spreading. The north-east, particularly, was caught up in a prolonged period of magma-spreading and volcanic activity that also affected an area from western Scotland to Iceland and Greenland. This period, which may have lasted ten million years, was when lavas spread across much of what is now Antrim-Derry, producing distinctive black basalt rocks. It was during this time that the famous 'columnar' basalts exposed at the Giant's Causeway, on the north coast of Co. Antrim, were created. About this time, too, the Alps were being created far to the south, prompting geologists to refer to this general period as the Alpine mountain-building phase.
These great long-time shifts in plate relations now provide the framework within which the geology of Ireland is studied. As well as mountain-building, the impact of plate tectonics is expressed in earthquakes and in the faulting or fracturing of the earth's crust.

These tectonic processes can produce the uplift and lowering of sections of a landmass. There is increasing evidence that such processes may have been significant in Ireland during the Tertiary period.

For our study of the physical landscape, plate tectonics also contributes to two other relevant topics: the rock cycle, and the geological time scale.