Within the three major categories of igneous, sedimentary and metamorphic, geologists recognise many more specific rock types.These are classified according to their appearance and composition, and according to the conditions in which they formed. 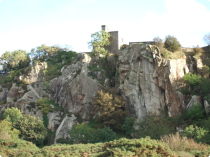 Basalt's black volcanic rock texture and small crystals can be seen in this photograph.

is a good example of an extrusive igneous rock that formed as lavas surfaced and spread. It is black and has very small crystals (reflecting fast cooling).
Granite is an example of an intrusive igneous rock. It is white or pink-coloured and, reflecting a much slower cooling, may have large crystals. In the early nineteenth century, granite taken from Dalkey hill in south Dublin was used to build the great 'asylum harbour' at Dun Laoghaire

This is built with granite rock quarried from Dalkey Hill, Co. Dublin. 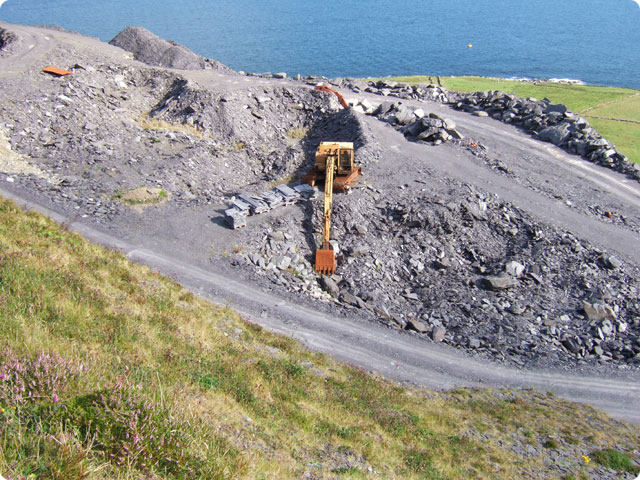 are sometimes evident on sedimentary rocks formed in shallow water.

Metamorphic rocks can likewise be subdivided, some of the major types being quartzites, slates, schists, and gneisses. The Valentia Island slate quarry flouished during the nineteenth century. Valentia slate was exported to Britain and used to roof the House of Commons in London.

An illustration of the sedimentary rock limestone.

This metamorphic rock consists of recrystallised sandstone combined with quartz.

This metamorphic rock is commonly found in areas with high tectonic areas. With further metamorphism, slate turns to phyllite, then schist or gneiss.

The somewhat course-grains can be seen clearly here.

The granular texture can clearly be seen here.

Previous - The Distribution of Irish Rocks
Next - Carboniferous limestone