The Work of Ice 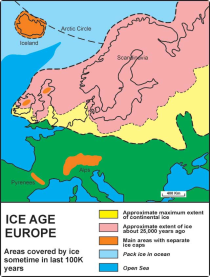 Map drawn by Stephen Hannon.
Enlarge image
The impact, over the last million years or so, of a series of glaciations extended across much of western Europe. The most recent of these glaciations saw ice, on occasion in excess of a thousand metres thick, covering most of Ireland. These glaciations had a huge impact, as a result of the erosive work of slow-moving ice and also a result of depositional activity under the ice and at its margins.

The most widespread glaciation built up as a dome across much of lowland Ireland. Some mountain areas, for example in Cork-Kerry and in Wicklow had their own separately-driven ice caps. A few areas, mainly in parts of the south, remained unglaciated. Some of the most striking mountain scenery has been moulded by glacial erosion, although its precise expression relates also to the geology (contrast the pointed sandstone Kerry Reeks with the gently rolling profiles of the granite mountains of Wicklow and Mourne).

The evidence of glacial erosion is widespread in many mountain areas. Over-deepened rock hollows, some of them water-filled, represent the corries or cooms, where snow first lay, thickened and nourished ice. From these locations ice advanced into and down valleys. To these locations, the ice retreated. Two of the most spectacular corries are the Devil's Punchbowl, on Mangerton Mountain in Co. Kerry, and Coomshingaun, in the Comeragh mountains of west Waterford, but these features are widely-distributed in mountain areas. In west Mayo up to sixty small corries can be counted. Near Dublin, good examples are upper and lower Lough Bray

Courtesy of Andy B 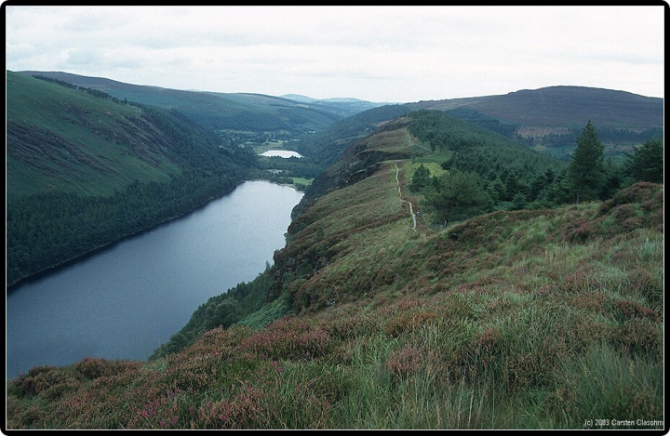 Courtesy of Carsten Clasohm
Enlarge image
Other expressions of mountain glaciation are the sharp ridges, or arętes, between valleys, heavily-scoured rock surfaces, and over-deepened main valleys, many of which have a U-shaped cross-profile, and which may be overlooked by hanging feeder valleys. Such features are widely distributed, but the long narrow, steep-sided, inlet at Killary Harbour, Co. Mayo, must be among the most impressive. Here the sea has inundated the glacially-deepened trough, to produce a landscape reminiscent of a Norwegian fjiord.

Across lowland areas, there is also evidence of glacial erosion, but there is also extensive evidence of glacial deposition. Such deposition occurred in the form of moraine, large heaps of debris pushed in front of the ice, as well debris that was held within the ice and which was dropped as the ice waned. This latter debris now constitutes the till (or boulder clay), alias the glacial drift, that covers bedrock in many parts of the country and on which are developed soils of varying levels of fertility.

Deposition also occurred from streams that ran under the ice. Across the midlands, there are the distinctive ridges known as eskers

How parts of Ireland might have appeared after the last ice age: bare land surfaces in Iceland from which ice has recently retreated.

Courtesy of the University of Iceland

and kames, which appear to have been created either under or at the margins of the ice. The term esker which derives from the Irish eiscir for ridge is now in general international scientific usage to describe these ridges.

This is an aerial view of Killary Harbour. The long-narrow and cliff-lined inlet can be seen here.

Photograph depicting the drumlins in Clew Bay, Co. Mayo. Drumlins are low hills formed and shaped by the flow of ice in the last Ice Age.

Meltwaters of ice to the north have led to a massive channel being formed. Some water which formerly went to the Shannon now turns south to the Blackwater

Image courtesy of Cambridge University Committee for Aerial Photography
North of Galbally, Co. Limerick - Image courtesy of Cambridge University Committee for Aerial Photography
But perhaps the most distinctive of all lowland topographies associated with ice are the swarms of low hills known as drumlins (another term now in general scientific usage). These occur in a wide girdle, known to academics as the Drumlin Belt, that stretches across south Ulster from Co. Down in the east to Donegal Bay in the west. Smaller drumlin swarms are to be found in parts of Co. Clare and in west Mayo, where some of the drumlins have been partly submerged, and now appear as the islands of Clew Bay.

Drumlins are usually about 300 metres long and perhaps 100 metres wide. They may be from 15 to 40 metres in height. Seen from a distance as from the main Dublin-Belfast road near Newry they present a rounded, rolling and quite subdued landscape with many small hills of near uniform height. This distinctive landscape has been likened to a 'basket of eggs'. Historically, the south Ulster drumlin belt has been of great significance.

The bewildering labyrinth of lakes and small hills was one reason why the Tudor English found it so difficult to take and control Ulster in the late sixteenth century. Arguably too, and certainly in the eyes of the famed Belfast geographer Emyr Estyn Evans, the drumlin belt has had an insulating effect that reinforces the regional identity or 'personality' of Ulster. For some of its residents, however, most notably the poet Patrick Kavanagh (1904-1967), the small farm world of the drumlins was frustrating and claustrophobic. In this way the physical landscape may perhaps be considered to translate and close in on the psyche, whether collective or individual. 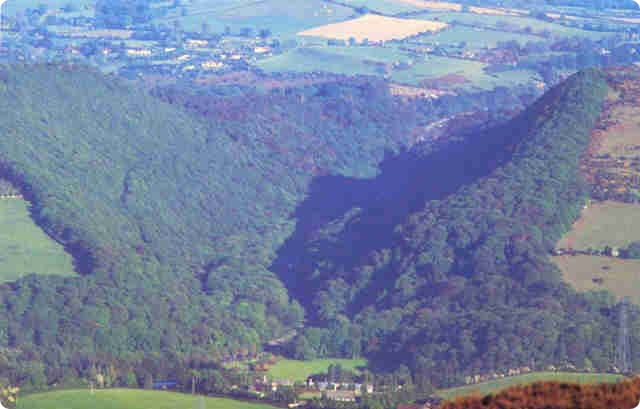 Copyright R. Nairn.
Enlarge image
Several periods of glaciation have prevailed in Ireland during the last million years. The last of these finally waned some eleven or twelve thousand years ago. As the ice retreated and finally melted, huge quantities of water were released with sometimes far-reaching consequences. The impact of the few hundred years of drainage chaos that followed the melting of the ice is still evident in the landscape, in large 'meltwater channels' (for example the Scalp, and the Glen O' the Downs, both in Co. Wicklow) that now carry only small streams or none at all, in altered river courses, and in the lowland raised bogs, many of which began to form while drainage was impeded in the immediate post-glacial aftermath.

Previous - A mystery of Irish landscape history
Next - Changing Sea-levels