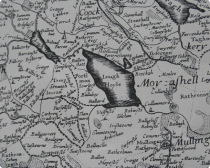 Lough Owel, one of the largest lakes in Westmeath, is situated on the boundaries of the Parishes of Mullingar, Portnashangan, Leny and Portloman and lies in the Baronies of Corkaree and Moyashel and Magheradernon. The spelling of 'Lough Owel' has appeared in many forms and O'Donovan authenticates that Loch Uair, Loch Ooill, Lough Owel, Lough Howell or Lough Foyle all refer to that lake that lies two miles to the north of Mullingar. According to the ancient Dinnsenchus legend, Lough Owel/Loch-Uair originated from one of two Firbolg brothers who resided beside it.

Two streams flow from Lough Owel, The Golden Hand and The Silver Hand. The Golden Hand, being the beginning of the Brosna flows from the south end and The Silver Hand flows from the northern end. There is one small stream running in to it at Portnashangan which Piers states is dry at every drought. Piers also tells us that the Silver Stream at that time turned five mills over a course of not a full mile in length the smallest of which had a wheel twelve feet in diameter. This stream continued on to Lough Iron at the South end and the river Inny at the North end, before it fell into the Shannon.