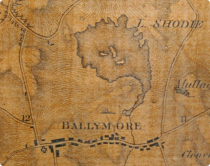 Lough Sewdy is one of Westmeath's smaller and lesser-known lakes, yet it and its surroundings have an interesting history. It lies close to the village of Ballymore, is divided between the parishes of Ballymore and Killare, and is about twelve miles west of Mullingar. It includes parts f the townlands of Shinglis, Lugacaha and Ballymore (Ballymore parish) and Mullaghcloe (Killare parish).

The name was rendered 'Loch Seimhdidhe' in the Annals of the Four Masters; 'Loch Seimhdile' in the locality in the pre-Famine period; and 'Lough Sewdy' by John O'Donovan (Ordnance Survey name book, 1837). O'Donovan considered that 'Seimhdidhe' was a personal name. However, the lake was also called 'Lough Sunderlin', that being the version in the Down Survey. In one of his letters, written from Ballymore in 1837, O'Donovan insisted that the lake should be called 'Lough Sewdy', being 'so famous a name'. Despite this, the name used on the six-inch map of 1838 was 'Lough Sunderlin'. The near-by village was often called 'Ballymore-Lough Sewdy' or 'the great town of Lough Sewdy'.