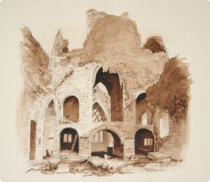 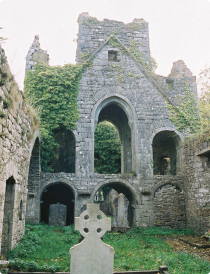 This is a Dominican Priory, known as St Mary's Priory, and was built in 1507 by Thomas O'Farrell. Wakeman made this illustration of the interior of the nave on the 26th of October in 1878.

The site itself is located on a ledge from which the ground drops steeply to Lough Arrow to the south. The remains consist of a church with a nave, chancel, tower and later transcept. This transcept is located on the east end of the north wall of the nave and the archway into this is visible on the left of Wakeman's drawing. The interior contains burial memorials dating from the 17th century to the present day.

The main entrance is visible before the archway depicted on the left of Wakeman's drawing and the small hole in the wall between the two is called a stoup, where holy water was kept. Another doorway, not visible in his drawing, is located to the east end of the south wall of the chancel. This doorway gives access to the church from the base of a set of external stairs that lead down the south wall from the first floor of the tower. The tower itself has been described as a large magnified rood screen, from where a crucifix would have hung in the large central arch on the first floor.

At ground floor level there are three compartments, the central one linking the nave to the chancel. In the roof of this central arch are two bell rope holes, with two further corresponding ones in the roof overhead, which once lead to the bells of the church. The compartment on the left of the painting now holds the gravestone of Terence McDonagh, who was an important Catholic lawyer during Penal times and died in 1717. This gravestone was not in place when Wakeman made his drawing. Just in front of this gravestone is the grave slab of David Duignean, a professional Gaelic scribe who died in around 1696.

The compartment on the right of Wakeman's picture is now blocked by rubble wall. Above the first storey appears to be another floor, with rectangular windows, which may have provided accommodation for the priest. On a small rise, 70m to the north of the site is a holy water font called St Dominic's Stone, which supposedly possesses a cure for warts. St Dominic's holy well, located to the south east, is now destroyed by a small pump house. However, gatherings were reputed to have occurred here in the 19th century on St Dominic's Day, August 4th. One can see skulls on the ground in Wakeman's drawing which were probably disturbed from newer burials going into graves. Burials within the interior and those outside near the walls can cause problems with the structural integrity of the building by undermining the foundations.