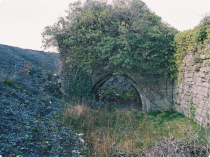 Wakeman painted this on 23 October 1878. The Abbey is located close to the shoreline of Ballysadare Bay within the grounds of an active limestone quarry and concrete works. Today it is surrounded by and largely submerged in quarry debris. The only visible remains are parts of the north wall of the nave (13.6m long) and chancel (6m long) of the church, with the lower part of the tower between them. The tower rises from two substantial walls with two pointed arches of dressed stone linking the nave to the chancel. It measures 6.35m north to south by 3.7m east to west and reaches about 6m above present ground level. The chancel arch is depicted in Wakeman's painting.

His painting clearly illustrates the changes to the site caused by quarrying and provides us with a valuable record of what the site looked like during his time. In his illustration an arched opening is visible in the north wall on the right of the painting. The west wall can be seen through the tower's arch and the south wall is also visible. Today the internal ground level reaches to the corbels of the arch and much of what is depicted by Wakeman is now invisible.

The remains belong to the Abbey of St Mary of the Canons Regular of St Augustine, which existed in the mid-13th century. The surviving north wall might be 13th century but there are no datable architectural features. The tower is a later insertion and dates to the 15th or 16th century. A description given in 1585 states that it consisted of a partly thatched church, a dormitory, three cottages with gardens, a cemetery and three ruined buildings. A large fragment of window tracery, probably from this site, was found in the graveyard at St Fechin's Church, 250m to the east.