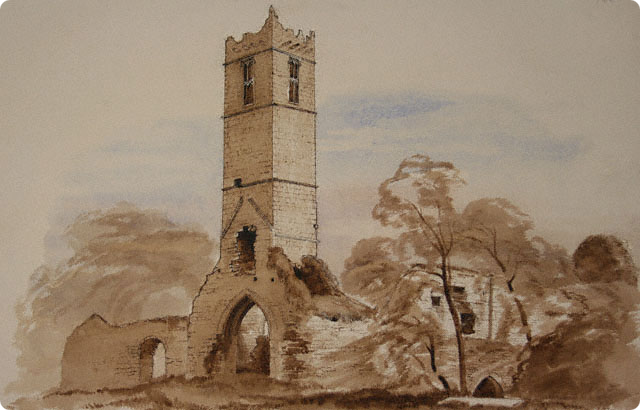 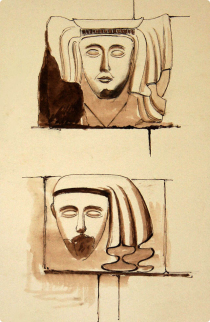 Wakeman painted the above image of the Augustinian Friary on 28 October 1878. It is located on the west bank of the River Moy and at the east end of Banada graveyard, on top of a steeper slope, which rises from the bank of the river.

Donnchadh O'Hara established it in 1423 and its architectural features confirm a 15th century construction date. Much of the structure collapsed in 1897, twenty-one years after Wakeman made this painting. Today only part of the eastern ends of the north and south walls of the chancel survive.

At the east end of the surviving south wall is a decoratively arched two-seater sedilia, where priests would have sat. Adjacent to this is a doorway into the church with current ground level half way up its sides. This leads into a ruined passage within the walls, which opens to a spiral staircase, which is also ruined.

A 15th century carving of a head with an elaborate head dress is found in part of the north wall but this originally came from the graveyard after the tower had collapsed. This is similar to the lower image of one of the two decorated corbels from below the tower that Wakeman painted, but differs considerably and may not be the same.

The other figure depicted by Wakeman of a woman shows again a 15th century elaborate head dress typical of the period and shows that Gaelic-Irish families such as the O'Hara's were importing European fashions. 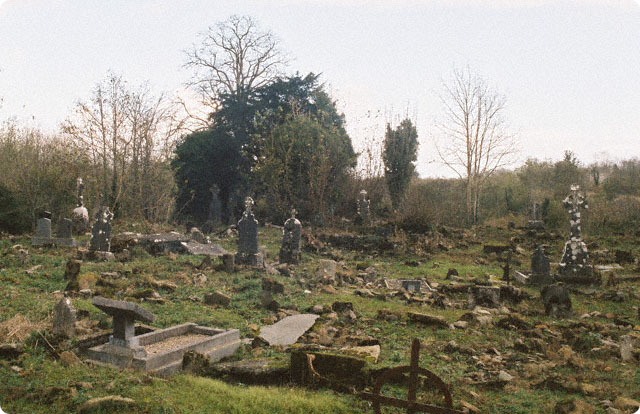 Wakeman's painting depicts the tower and parts of the surviving east end of the church. A large pointed arch opens into the nave, which is completely absent in his painting with a possible second identical arch leading into the chancel. A large ruined opening occurs above this arch but below the roof level.

Two string courses encircle the tower below two large windows, each with four lights on the west and south sides of the tower, with matching windows probably being on the north and east. Above the windows are another string course and a series of waterspouts or gutter stones that once drained the wall walk on the towers roof.

The towers battlements are also fairly much intact. A wall of a north transept abuts the base of the tower and an arched opening appears to be present in the south wall of the chancel.

The appearance of the tower's slim profile would help confirm that it was built around the same time as the rest of the friary. Lying within the graveyard are many carved limestone blocks along with architectural fragments of pillars and windows that came from the collapse of the friary. Two of the gutter stones from the wall walk have been re-used as burial markers.