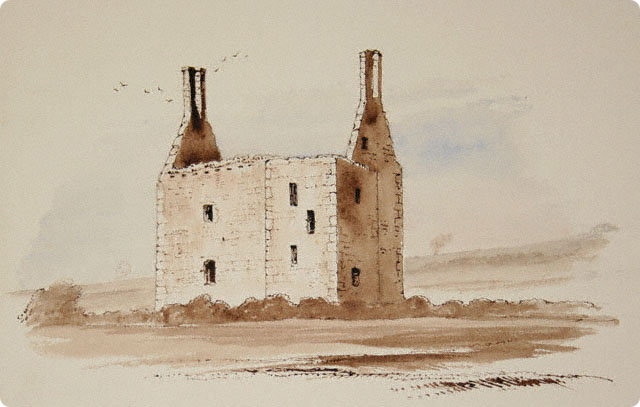 Wakeman drew this on 5 August 1879. The manor house is located south west of Castlebaldwin and one might think that the village grew up around the castle, which was built c.1650. In fact the present village only grew up during the first decades of the nineteenth century with the creation of a staging post on the mail coach road from Boyle to Sligo.

There is little known about the Baldwin who may have been the original occupant of the castle, but it is documented that the manor house and lands around it were granted to Edward Nicholson who became High Sheriff of Co. Sligo in 1671. Around 1690 Teige O'Regan was alleged to have left the castle to go and defend the Green Fort and Sligo. The Williamites were approaching and they set fire to it.

Castlebaldwin manor house is a small two-storey semi-fortified L-shaped manor house. It was constructed when the purely defensive nature of castles was being made obsolete by the advances in artillery.

The function of the house was to provide a comfortable residence that could be defended against a small-scale attack. The rectangular main block of the structure measures 10m by 6m with two high gables at either end, which survive with rectangular chimneystacks intact.

The square projection on the southwest side, seen in Wakeman's image, originally contained a timber stairwell. At ground level the entrance on the northeast side has traces of a draw-bar socket, and above it is a pair of corbels which originally supported the machicolation of roof level; this was used by the inhabitants to throw stones or other missiles on the enemies to ward them off.

The house is constructed of mortared roughly cut sandstone blocks and the floors in the house were all made of timber. At roof level is a wall walk (interrupted by the gables) and protected by a parapet.