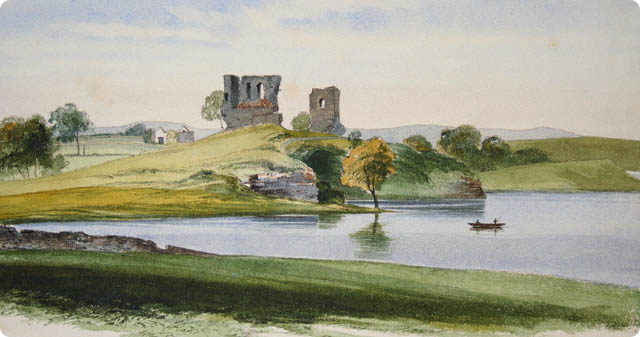 Castledargan, County Sligo.Drawn on the spot for Colonel Cooper by William Frederick Wakeman.

Castledargan, County Sligo.Drawn on the spot for Colonel Cooper by William Frederick Wakeman.

Wakeman made this full colour painting on 30 October 1878. It depicts the remains of Castledargan tower house and bawn, which is located on top of a cliff overlooking Lough Dargan immediately to its north, clearly visible in this painting.

Two parts of the castle survive and are 25m apart. The eastern section on the right is the probable remains of the main tower of the tower house. The remains are the southeast corner of the tower and only two storeys remain, but it would have been higher. Part of a doorway survives, which gives access to a stair way lit by a series of slit windows. These lead to a fragmentary entrance to a first storey chamber. There is a large, ruined window here, visible in the painting.

The western surviving part of the castle is also two storeys high, but it too would have been higher. At the ground level are the remains of an angled passageway and doorway. This fragment of the castle was most likely a mural tower connected to the bawn wall. A curving section of natural rock outcrop with partial stone-facing arcs between the east and west blocks and this is probably the remains of the bawn wall.

Just to the south of the castle are the remains of a number of 18th / 19th century buildings and a walled garden, which were part of the estate of the 18th century Castledargan House.

By the 15th century, the Gaelic-Irish began to build tower houses, which are three to five story rectangular or circular fortified stone towers, often surrounded by an enclosed area called a bawn, which was defined by a stone wall. Castle building was a feature of emerging lordships and many tower houses were built for strategic reasons in key military positions.

They represent a typical form of lordly residence built throughout Ireland in the 15th and 16th century. Conor Mac Donagh, a member of the predominant family in the barony of Tirerrill, built the castle in 1422. The MacDonagh's were part of a breakaway branch of the MacDermots of Moylurg who moved northwards from north Roscommon during the late 13th century. By the early 15th century the O'Conor kings of Connaught had established themselves over much of Connaught and sublords controlled various territories. The MacDonagh's were lords of Tirerrill and Corran, the O'Hara's were lords of Leyney and the O'Gara's lords of Coolavin, all within the overlordship of the O'Conors.

Moymlough is another example of a tower house in Sligo and a related castle type can be found at Moygara.