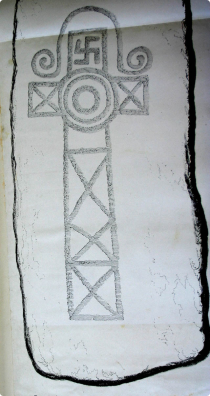 This is an inked up drawing of an original rubbing of the cross at St Bridget's well, just to the north of Cliffoney Village made by Wakeman in August 1880. The cross could date to around the 8th century.

The well has been out of use since around 1959 when a yearly pattern or ritual gathering occurred at the well on the feast day of St Bridget on February 1st. A statue of the saint, still at the well, has the date 1959 marked on it. A cattle fair used to be held at the site over two hundred years ago.

The first day of February is an ancient festival of Imbolc, marking the beginning of spring. The day is associated with St Bridget (Bride, Brigit), who lived from AD 452-525. She founded a number of monasteries and converted many Irish, becoming the country's second important saint after Patrick.

In reality Bridget was a Tuatha De Danann goddess of fertility and fire and the daughter of the Daghda. St Bridget became associated with many of the ancient goddesses attributes, being generous and a provider of food and hospitality, with links to the hearth, smiths, poetry, healing and marriage. Holy wells dedicated to her have various healing properties, including that of eyesight, and also helped induce pregnancy and ease labour pains. 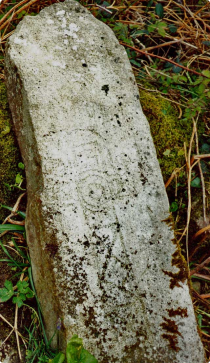 The well is very overgrown today and rarely visited. Wakeman drew two small carved crosses which were on the steps down to the well when he visited. There is no trace of these steps today.

The most noticeable element of the cross - which is greatly weathered today and difficult to make out - is the occurrence of a swastika on the upper part. The swastika was the symbol of St Bridget and today some of the Bridget's crosses made from rushes take the form of a fylfot, another word for the swastika.

Until the Nazis used this symbol from the 1920s, the swastika was used by many cultures throughout the past 3,000 years to represent life, sun, strength, and good luck.

Even in the early twentieth century, the swastika was still a symbol with positive connotations. During World War I, the swastika could even be found on the shoulder patches of the American 45th Division.