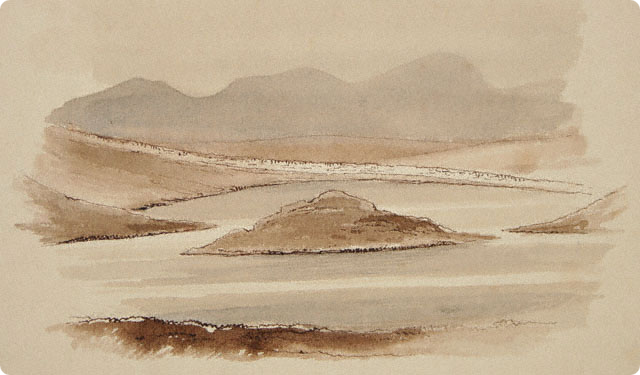 Loughnacrannoge near residence of Sir Malby Crofton Co. Sligo. Drawn on the spot for Colonel Cooper by William Frederick Wakeman.

Loughnacrannoge near residence of Sir Malby Crofton Co. Sligo. Drawn on the spot for Colonel Cooper by William Frederick Wakeman.

Wakeman painted this example of a crannog sometime in 1895. This is Loughnacrannoge (lake of the crannog) near the former residence of Sir Malby Crofton. This residence is Longford House, south of Beltra.

Within the townland of Loughnacrannoge is this small turlough (a lake or pond that partially dries out in the summer) and almost centrally located within it is this c.12m diameter crannog. It is about 1.4m high from the bottom of the very silty lake bed.

W. G. Wood-Martin, the Sligo antiquarian, excavated a small trench in this sometime before 1886. He found no objects on the surface or in the excavation trench, but his investigations showed the site was built up of clay and stone and that there were stones built up around the outer edge.

The term crannog comes from the Irish word for tree, crann. Crannógs are man-made islands and can have a variety of dates of construction and use. They are found in shallow lakes and bogs and occasionally in turloughs and rivers.

There is a concentration of crannogs found among the shallow inter drumlin lakes that stretch from Clew Bay in Mayo to Strangford Lough in Co. Down. In Sligo most crannogs are found in low lying lakes such as at Lough Gara or Lough Arrow, while many of the Ox Mountains lakes possess few crannogs.

Lough Gara has the highest concentration with 76 crannógs identified to date, while Lough Arrow has 11. These are exceptional as most lakes generally have one or two crannogs on them. They have been seen as high status, defended settlements; however, research at Lough Gara has shown people of less material wealth also used these man-made islands.

Many crannogs are multi-period monuments in that they have been built and rebuilt and used for a variety of functions over a substantial time period. There are three general types, high, low and platform crannogs. This site at Loughnacrannoge is a low mound crannog as it is less than 2m above lake level and made predominantly of organic matter. Those made with stone are called cairn crannogs.

Some have causeways or jetties, but there is no evidence of these at Loughnacrannoge. Research has shown that low crannogs can date from between the Bronze Age to the early medieval period, that's from around 2500 BC to 1100 AD, though many appear to be roughly contemporary with ringforts and cashels, such as at Cashelore. Some excavated examples have shown evidence of settlement, iron production and weaving.