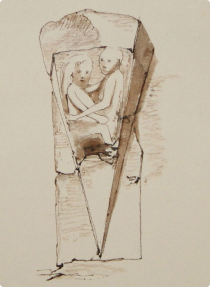 Wakeman painted this scene of the interior of Moygara nCastle on 31 October 1878. This well preserved castle belongs to the final stage of tower house building, and Moygara could be described as having moved beyond a traditional architecture of a tower house such as those at Moymlough and Castledargan. Its form of having a square bawn wall, 51m long, with a tower on each corner and gate tower in the centre of the west wall is probably unique.

Wakeman's illustration is from the interior and shows the gate tower and the largest of the four corner towers on the south west corner. It is on a slight rise in rolling pasture lands with slightly higher ground to the south and extensive views in all other directions, overlooking Lough Gara to the southeast.

The oldest part of the castle is a ruined rectangular structure on the north side of the bawn wall, which may have been an earlier tower house. The walls are about 3m high, but the original top of the wall in now grass covered and slightly lower than the original height. There are numerous gun loops throughout the castle, located along the walls and the towers.

The Gate tower is two storeys but now very ruined. It may be slightly later than the 2.2m wide doorway and the walls. Two drawbar sockets survive. There is much rubble and collapse around the gate tower and entrance passage, but lying on the ground are two keystones, each having a carving on it. These are now weathered almost beyond recognition. Fortunately, one was illustrated by Wakeman and depicts two figures with limbs intertwined, while the other might be a single figure holding something in its arms.

The southwest corner tower is three stories high, while the others are only two. All the door and window frames were made of wood. It has a fireplace and an array of gun loops and has plain rectangular merlons on its battlements.

Moygara castle was the chief residence of the O'Gara's. O'Donnell attacked it in 1538 and it was also attacked by a band of mercenary Scots, who burned the buildings, in 1581. It could be that the low rectangular structure on the north wall was a tower house and that the present structure was built following the 1581 attack. It is apparent judging from the number of gun loops, the style of windows and the slight angle of the towers that the building dates to the late 16th or the early 17th Century. 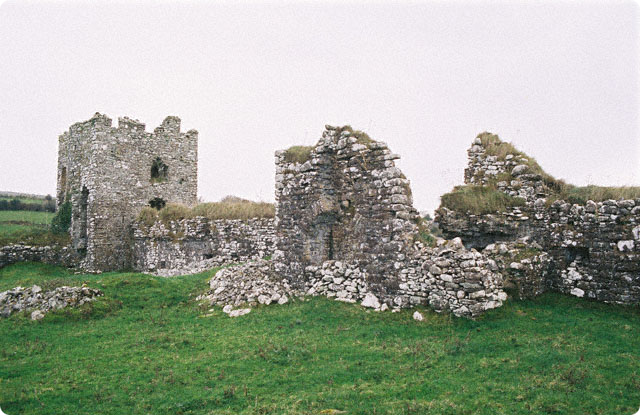