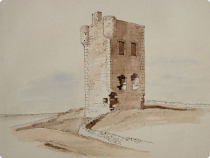 Painted by Wakeman in August 1879, this illustration depicts a Napoleonic signal tower at Rathlee, east of Inishcrone. These were built between 1804 and 1806. There were 81 of them extending from Dublin to Bantry in Co. Cork and up along the west coast as far as Malin Head in Co. Donegal.

They were built by the British Government in reaction to the various French invasion attempts in the 1790s, and in particular, the 1798 French landing at Killala in Co. Mayo. They worked on a signaling system using ball and flag methods, where various messages could be transmitted from station to station using these signals. A 15m mast was positioned on the seaward side of the signal tower where the flags and balls would be hoisted so that the next signal tower could see the message and pass it on to the adjacent one.

There was a tower at Creevagh, near Kilcummin, on the west side of Killalla Bay, then the Rathlee tower, which was number 65 on the official list and had its signal lieutenant appointed to it in July 1805. Carrowmably, near Dromore West was the next and the tower still survives there.

The following signal towers in Sligo, now no longer visible, were at Knocklane, Streedagh and Mullaghmore. Following Nelson's victory over the French and Spanish fleets at the Battle of Trafalgar in 1805, there was less threat of invasion and by 1809 the British decided to abandon them.

Signal towers generally follow the same design, being two stories high and square in plan, with the wall opposite the entrance being slightly thicker to accommodate a fireplace and chimney. The interior is about 4.5m by 4.5m and the walls are about 0.6m thick. The entrance is on the first floor, on the seaward side, which was accessed via a ladder. Above the entrance is a machicolation, with two more on the landward corners of the tower. The ground floor windows are relatively small, with taller ones on the first floor. The height of the tower is about 9m. Compared to Wakeman's drawing considerable damage is visible on the right of the photograph, which has weakened the integrity of the building.

The small structure visible to the right of the tower in the photograph is a look out post from World War Two (1939-45). These small concrete buildings were constantly manned by the L.D.F. (Local Defense Force). They had to report any activity at sea and record anything washed up on shore, including bodies from ships sunk in the Atlantic.