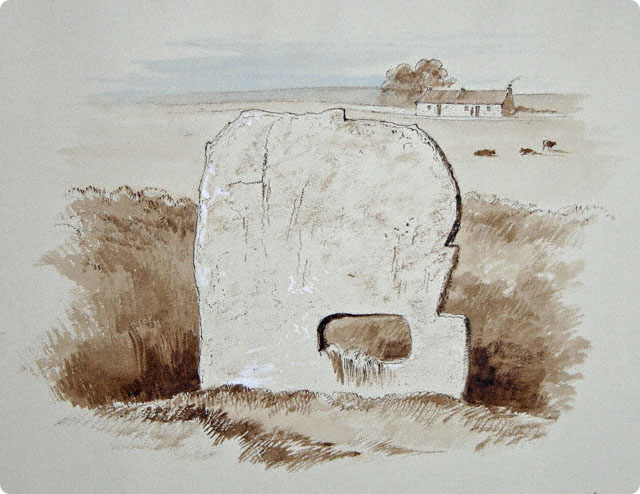 Wakeman painted this standing stone in August 1882. It is locally called the Cloch Bhreac or 'speckled stone' as well as the Cloch Lia or 'grey stone'. The Cloch Bhreac is a thin limestone flag set on edge and measures 2.2m wide and 2m high. However, it was up to 1m higher in the past.

A stream passes nearby, which gives its name to the townland, Tobernavean (Tobar na bhFian, the Well of the Warriors). The ground around the standing stone is quite wet because of the stream, which suggests the stone is embedded quite deep into the ground. It has a large sub-rectangular hole on its east side towards its base, which measures 0.8m by 0.6m. It is on a boundary edge between three parishes; Kilmacowen, St. John's and Killaspugbrone, and three townlands; Tobernavean, Derrydarragh/Oakfield and Barnasrahy.

It is located about 2km north of the Carrowmore passage tomb complex. The Sligo antiquarian Wood-Martin suggests it might be of comparable date to some of the later monuments at Carrowmore. There are similar holed stones in Britain, where children were passed through the hole for cures of ailments. Other holed stones occur throughout Ireland, but the holes are generally smaller and often occur in standing stones such as at Doagh, Co. Antrim. Some of these holed stones have been called agreement stones where contracts or pledges of loyalty were made by joining hands through the hole and swearing an oath.

Standing stones are not all from the same period nor did they all serve the same purpose. Some marked Bronze Age or Iron Age burials, while others appear to act as route markers or boundary markers. Tobenavean appears to be a boundary marker and its date is difficult to establish.