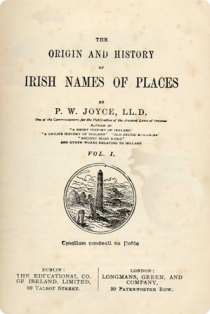 The information on placenames published here first appeared as a series of articles published in The Meath Chronicle in 1956 and 1957, written by Mrs. Margaret Conway, N.T., Moattown, Kildalkey, and Secretary of the Meath Archaeological and Historical Society.

Throughout her writings on placenames, Mrs. Conway refers to Patrick Weston Joyce's The Origin and History of Irish Names of Places, first published in three volumes in 1869. In his chapter on placenames derived from customs, amusements and occupations, Joyce traces the origins of the name Taillte.

"One of the Dedannan kings, Lewy [Lú] of the long hand, established a fair or gathering of the people, to be held yearly on the 1st day of August, at a place on the Blackwater in Meath, between Navan and Kells; in which various games and pastimes, as well as marriages, were celebrated, and which were continued in a modified form down to the beginning of the present century. This fair was instituted by Lexy in commemoration of his foster-motehr, Taillte, who was daughter of the king of Spain; and in honour of her he called the place 'Tailltenn; ('Tailltee, gen. Tailltenn), which is the present Irish name, but corrupted in English to 'Teltown'."

"The place still exhibits the remains of raths and artificial lakes; and according to tradition, marriages were celebrated in one particular hollow, which is still called 'Lag-an-aenaigh [Laganeany, the hollow of the fair]. Moreover, the Irish-speaking people all over Ireland still call the first of August Lugh-Nasadh [Loonasa], i.e. Lewy's fair."