Manual fire engines were increasingly used from the early eighteenth century onwards. Teams of men pumped the handles at each side to provide a powerful and continuous jet of water. As technology improved, bigger manual pumps were built, but from the 1860s steam appliances increasingly ousted them. 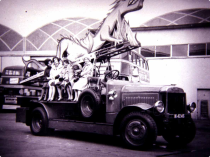 Fire Engine in St. Patrick's Day Parade 1962. This photograph shows the dressed up engine surmounted by friends of the firemen at Donnybrook Garage before the fire engine entered the parade.

Fire Engine in St. Patrick's Day Parade 1962. This photograph shows the dressed up engine surmounted by friends of the firemen at Donnybrook Garage before the fire engine entered the parade.

Merryweather of Greenwich was a legend in the fire-fighting world until the 1980s.

This Merryweather Paxton manual engine was bought in 1883 by the Marquis of Drogheda for his demesne, Moore Abbey, Monasterevan, County Kildare. It has a 6-inch engine, and was worked by a 22-man crew, producing 100 gallons a minute at one stroke per second; the side handles were folded for travelling. Weighing 30cwt. (1,524 Kg) laden, it was normally pulled by two horses but could be manoeuvred by hand in confined spaces.

Fire Brigade Funeral. This photograph was taken in Dublin in the early 1930s.

Fire Brigade Funeral. This photograph was taken in Dublin in the early 1930s.

The Merryweather remained in Moore Abbey during the occupancy of the celebrated tenor, John Count McCormack from 1925 to 1937. Meanwhile, in 1934, the family engineering firm of Samuel E. Holmes Ltd. took over the former Cassidy's Distillery, which had operated in Monasterevan from 1784 to 1921. John Holmes, whose grandfather, as Clerk of Works to the Marquis, had the appliance in his charge from 1868 to 1911, bought the Merryweather in 1948 and stored it in the old distillery.

Cassidy's Distillery, at one time among the largest in Ireland, was the type of industrial enterprise that might also have had an appliance of this type. Before Council Fire Brigades became universal, the services of local factory or estate fire fighters were frequently made available to local communities.

Rathmines Fire Engine. This is a 1932 Greenmount.

Rathmines Fire Engine. This is a 1932 Greenmount.

In July 1996, through the good offices of Ms. Eleanor Holmes, the Merryweather came to the Museum. It was in generally good condition and found to be in working order. An almost identical engine, Welbeck, is preserved at the Science Museum in London, while Wotton has been restored by firemen at Dorking Fire Station in Surrey. Another appliance of this type, originally in Arus and Uachtarain, is in care of the National Museum. Acc. No. 1996/6P (Oct. 2003)

This is the Transport Museum's oldest fire appliance, next in line being our 1889 Merryweather steam pump.