The Flight of the Bremen 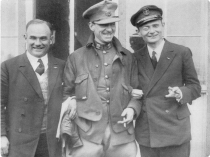 After the First World War, the ambition of all aviators was to make the first crossing of the vast Atlantic Ocean by aircraft. Nowadays, flying to America is a fairly comfortable experience and pilots have an abundance of power and navigational aids upon which they can rely, but in the 1920s this was the greatest test of man and machine. The first transatlantic flights were made in the West-East direction but to make the flight from Europe to North America was far more dangerous because of prevailing winds and the greater flight time.

In 1927 ten unsuccessful East-West transatlantic attempts were made and seven lives were lost. Any subsequent attempts were discouraged but for many aviators, the unsuccessful flights only intensified their intentions to try again. The Atlantic airspace was finally conquered in April of 1928 and Ireland played a large part in the historic achievement. The Bremen took off from Baldonnel Aerodrome on Thursday 12th April 1928 at 5:38 am and landed on Greenly Island in Labrador the following day. One of the crew of three was an Irishman, Captain James C. Fitzmaurice. In 2003 we marked the 75th Anniversary of 'The Flight of the Bremen'.

Next - The First Transatlantic Flights