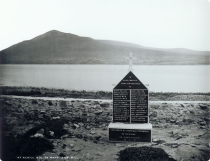 Photograph of monument located at Achill Beg commemmorating the victims of the Clew Bay drowning tragedy, 1894. This occured when a hooker, carrying people from Achill to Westport on their way to Scotland for seasonal work, capsized in Clew Bay. 32 people were drowned. The first train to use the Achill Railway line brought their bodies to Achill for burial.

Photograph of monument located at Achill Beg commemmorating the victims of the Clew Bay drowning tragedy, 1894. This occured when a hooker, carrying people from Achill to Westport on their way to Scotland for seasonal work, capsized in Clew Bay. 32 people were drowned. The first train to use the Achill Railway line brought their bodies to Achill for burial.

The first and last trains on the Achill line have very unfortunate associations. In 1894 a group of over 30 harvesters from Achill drowned in Clew Bay. Their hooker had capsized while carrying a full load of passengers to the steamship in Westport that would bring them to Scotland. A special train was brought into operation to transport the bodies of the victims home, for burial in Achill's Kildavnet Cemetery, even though the Achill railway extension was still under construction at the time of the accident.

Forty-three years later, in September 1937, another special train was put on to return the bodies of ten young boys to their native Achill. They had been working as harvesters in Kirkintilloch, near Glasgow, and had been burnt to death when their bothy or cabin, into which they had been locked for the night, had caught fire.

Two weeks later, on 30 September 1937, the Achill line closed for both goods and passengers, and the tracks were removed shortly afterwards.

These disasters had been prophesied in the 17th century by Brian Rua Ó Ceabháin from Inver in Erris, who was granted knowledge of the future after showing great kindness to a poor widow. He had foretold of the coming of the railway to Achill, describing carriages on iron wheels with smoke and fire. He prophesied that the first and the last trains to the island would carry home the dead.

Plans for other railway lines in Mayo never came to fruition. In the early years of the 20th century, there was much debate and speculation in Mayo County Council about the possibility of a rail link from Dublin to Blacksod Bay, where it would terminate at a proposed transatlantic shipping terminal. However, World War I commenced and the project was shelved.

By the 1950s, the general trend was towards closing railway lines rather than constructing new ones. Some railway lines initially ceased their passenger service and then later also discontinued their freight service. The Westport – Achill line finally closed in 1937. Islandeady, Balla and Bekan were among the stations closed in Mayo on the Westport – Dublin line. The last passenger trains on the line to Charlestown stopped in June 1963, although the freight train continued until 1975 when the station was completely closed. Foxford Station, on the Ballina line, received a reprieve: after being initially closed in 1963, it was later reopened in the 1980s and continues in operation today.

Excerpt from full-page article, Mayo News, September 24th 1997, written on occasion of 60th anniversary of the bothy fire at Kirkintilloch, Glasgow, September 16th 1937, in which ten seasonal workers from Achill lost their lives.

Photograph from Mayo News, September 24th 1997, taken originally at Kildownet Cemetary, Achill, 1937, of arrival of coffin of victim of the Kirkintilloch Bothy fire disaster. The fire, which broke out on September 16th 1937 at Kirkintilloch, Glasgow, claimed the lives of ten "Tattie howkers" (potato pickers) from Achill.