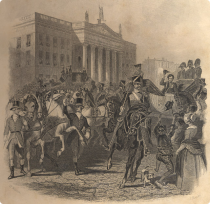 This is an illustration of King George IV's visit to Dublin in 1821. He was the only King ever to visit Ireland.

This is an illustration of King George IV's visit to Dublin in 1821. He was the only King ever to visit Ireland.

On the death of Queen Anne the succession in England and Ireland passed to a German Protestant, Prince George of Hanover. As a Catholic, James Stuart, the son of James II, was excluded from the right of succession and, though two Jacobite rebellions took place in 1715 and again in 1745, the Stuarts were never to regain the throne.

The prime intention of the succession of George I was to make sure that the new ruling family was Protestant. In Ireland the concept of a Protestant ascendancy was uppermost in people's minds: for virtually the whole of the Georgian period, the Anglican Church, established under Henry VIII, held sway. The Penal Laws passed against Catholics in the time of Queen Anne operated for most of the century, and it was only in 1828 that Catholic Emancipation was achieved.

Four kings, each called George, ruled Ireland from 1714 to 1830. George I died in 1727. George II was followed in 1760 by George III, his grandson, then only 22 years old. George III ruled Ireland in a period of remarkable growth and prosperity achieved by the Irish Parliament, under the leadership of Henry Grattan. George III was king at the time of the French Revolutionary wars, during the Irish Rebellion of 1798, and in 1800 approved the Act of Union which ended the independent Irish parliament and transferred political power to Westminster. In later life the King suffered from fits of insanity and from 1811 the United Kingdom was ruled by his eldest son, the Prince Regent, who in 1820 succeeded his father as George IV. He was the only king to visit Ireland, coming to Dublin in 1821.

Previous - The Later Stuart Period
Next - The Victorian Age