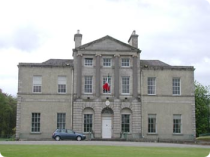 The known history of these lands and their occupation goes back to the time of the Anglo-Normans. Firstly they were granted to Alard Fitzwilliam by King Henry II and then to Warris De Peche from Hampshire, England, sometime before 1204. He and his descendants possessed the land for over a century. The ruin of a tower house style castle exists in the grounds which appears to date from this time. The castle adjoins a medieval church ruin which was the Church of the Blessed Virgin Mary. Over the next few centuries there were various occupiers, including the de Nottinghams and the Fitzgeralds of Kildare until 1537. Towards the end of the 1500's the Sarsfield family came into possession of the lands. By this stage it is recorded that there were two castles on the lands at Lucan, as well as two water mills. The Sarsfields had almost continuous possession of Lucan Castle, as it was then, and the lands up to 1718, when James Sarsfield, the second Earl of Lucan, died without an heir. The title died with him.

His father was Patrick Sarsfield (1650-1693), first Earl of Lucan. He was renowned for his military involvements, fighting in support of James II, and in particular saving Limerick from William of Orange by blowing up his weaponry supplies. In 1692, after moving to France, he was appointed Captain of the second troop of Irish Life Guards. In 1693, following the Battle of Landen in Flanders, Belgium, he died from wounds received and is buried in a town called Huy near the Belgian/French border.

The Vesey family then came into possession of the Lucan Estate when the Right Honourable Agmondisham Vesey married Charlotte Sarsfield, his first wife and a niece of Patrick Sarsfield. She bore him two daughters but died not long after their marriage. He then married Jane Pottinger and had a number of children and whose eldest son was Agmondisham Vesey, M.P., Accountant-General of Ireland. In 1772 their son Agmondisham commenced the design and construction of Lucan House which still stands today, demolishing the castle to make way for it.  He was named Professor of Architecture in Samuel Johnson's 'Utopian University' and seems to have been an amateur architect of notable talent. The oval dining room was possibly the inspiration for the oval room at the White House in Washington D.C., USA.. Both are on an axis aligned to the front hall, and Lucan was built shortly before James Hoban, the architect of the White House, emigrated from Ireland in 1784. The delicate plasterwork at Lucan is by Michael Stapleton; the Wedgewood room has painted panels in grisaille and mauve trompe l'oeil, and a ceiling "pulled down at the corners like a tent" (O'Brien and Guinness). Agmondisham built the bridge over the River Griffeen in Lucan Village in 1773. When he died in 1785 Colonel George Vesey inherited Lucan House and the Demesne. His daughter Elizabeth married Sir Nicholas Conway Colthurst and they and their descendents had possession of the Estate from 1836 to 1921. So at the time of Griffith's survey in 1851 the principle occupant for Lucan House was Charles Colthurst.

After 1921 there were several owners until the Italian Government bought Lucan House and some of the Estate in 1954 as a residence for its Ambassador. The remaining land is today a public park, Liffey Valley Park or Lucan Demesne, running alongside the River Liffey. 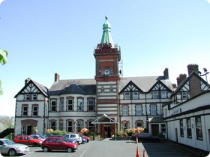 The Lucan Spa Hotel featured here, in the townland of Doddsborough, is the one which was in existence in the 1850's. The current hotel was not built until later in that century. It is estimated that the Georgian building was built in about 1795, though drinking spa waters for one's health had been a tourist attraction in Lucan for many decades before that. The spa associated with this hotel appears to have been discovered in 1758 and Agmondisham Vesey, on whose land it was located in Lucan Demesne, kindly built a wall around it to protect it from the River Liffey immediately alongside. The water of the spa was naturally impregnated with carbonate of lime and sulphureted nitrogen gas. In 1789 it is said that Lucan was the favourite summer resort. There was much dancing and merriment and there was a ballroom nearby, which was incorporated into or superseded by the 1795 hotel. The latter was said to be modelled on others in popular English spa resorts. It was still a popular resort at the time of Terence O'Toole's writings in the Dublin Penny Journal in 1832. However, by the time of Griffith's Valuation map, 1852, the resort had closed in favour of other spas located more convenient to Dublin city. As labelled on the map the hotel had become a School for Clergymen's Sons and the principle occupant was recorded as being John Burke. It was later also used as an asylum.

The Crescent, in the townland of Doddsborough, was built in about 1790 to cater for the guests of the Lucan Spa resort, along with the nearby Lucan Spa Hotel, now the Lucan County restaurant. This lovely terrace of Georgian houses is reminiscent of similar houses in English spa resorts and is still well maintained by its present occupants. Though the resort itself had ceased by the 1850's, not to return till later in that century, the houses were still in use and clearly marked on Griffith's 1852 map. Some of the occupants at the time included Catherine Baker, John Smith, Elizabeth Geoghan, Charlotte Collins, Doctor Stewart (possibly he of Palmerstown Hospital fame?) and Catherine Mansfield.