Jupiter Astride an Eagle

From the ceiling of the Own Room in Belvedere House

Jupiter Astride an Eagle -

The Jealous Wall - A Spectacular Folly

Robert Rochfort's younger brother George Rochfort commissioned Richard Castle, the architect of Belvedere, to design a mansion for him called Rochfort House (or Tudenham House). This house much larger than Belvedere was located less than half a mile away. Robert consumed by jealousy and rage had the Jealous Wall built to effectively block his view of Tudenham. He also built a number of other follies on the estate

The Jealous Wall - A Spectacular Folly -

Belvedere House, located on the north-east shore of Lough Ennell, was built in 1740 as a hunting lodge by Robert Rochfort 1st Earl of Belvedere. The architect was Richard Castle (1690-1751) one of Ireland's foremost Palladian architects. He also designed such well known houses as : Russborough, Carton, Powerscourt and Westport House. Among his major works in Dublin were Leinster House and the Rotunda Hospital. Belvedere House, although not very large, is architecturally very significant because of its Diocletian windows, dramatic nineteenth-century terracing and a landscaped demesne which boasts the largest and most spectacular folly in the country. When Robert Rochfort decided to use Belvedere as his principal residence he employed Barthelemij Cramillion, the French Stuccadore, to execute the principal ceilings. The Rococo plasterwork ceilings completed circa 1760 are among the most exquisite in the country. 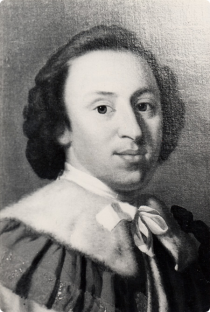 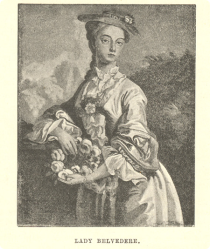 Robert Rochfort, the son of George Rochfort of Gaulstown House, built Belvedere House. He is largely credited with also undertaking the design of the parklands. Robert succeeded his father as MP for Westmeath at the age of twenty three . AFter the death of his first wife in 1731, he married Mary Molesworth, aged sixteen , the daughter of the third Viscount Molesworth, in 1736. Initially they lived at Gaulstown House with their children. Robert, however, spent very little time at Gaulstown and gradually they became estranged. Just eight years after their marriage Robert charged Mary with committing adultery with her bother-in-law Arthur Rochfort. He imprisoned her alone at Gaulstown for eighteen years while he went to live at Belvedere. In 1774, upon the death of the "Wicked Earl", his son George Augustus Rochfort 2nd Earl of Belvedere released his mother from her captivity. The tragic story of the trial and imprisonment of Mary was one of the great social scandals of 18th-century Ireland.

Hand-drawn and -coloured map of the estate, dated 1885, commissioned by C.B. Marlay, Esq., owner of Belvedere.

Belvedere Map and details of acreage

Belvedere Map and details of acreage -

Extract from the Survey Book 1851

Taylor and Skinner Map of the roads of Ireland

Extract from Taylor and Skinner's Road Maps 1775 showing the location of Belvedere Estate.