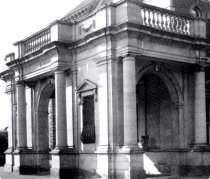 Heywood House, located in Ballinakill, is an ideal example of a big house in county Laois.

Heywood House, located in Ballinakill, is an ideal example of a big house in county Laois.

Heywood House in Ballinakill is an ideal example of a big house in county Laois. The main development of the great country estates began in the eighteenth century, a period of relative calm following the wars and disturbances of the previous century.  Enormous tracts of land had changed hands in some fashion or other. There were pickings to be had for the winning side in the Cromwellian and Jacobite Wars. A new breed of entrepreneur or merchant adventurer had arisen, few of whom had any direct relationship with the older Gaelic or Norman landed families. They were, however, influenced by the philosophies and architectural ideas of their time. The stage was now set for the reshaping of the country and great schemes of planting, field enclosures, draining and land reclamation were begun. The central focus for this activity was the 'big house,' as it came to be known in Ireland.

The influence of social and architectural ideas from Europe and Britain and the relatively peaceful state of the country had removed the necessity for the fortified dwellings of earlier periods which were a feature of the Irish countryside. The Palladian concept of house and garden conceived as one aesthetic unit had earlier spread from northern Italy to Britain, and was embraced with enthusiasm and skill by the new order. This concern for design, landscaping and atmosphere did not end with the house and gardens, but extended over wide stretches of countryside and included farm buildings, bridges, gate lodges, houses and cottages, tree planting and roads. Comprehensive and organised environments were created out of relatively wild countryside, where large stretches would still have been in a pristine natural condition.

The architecture of the houses reflected the current classical styles, and for the more prestigious houses eminent architects were commissioned. Those that survive are now more fully appreciated, due to the efforts of voluntary groups, concerned individuals and writers. These great houses are not examples of what we call 'local architecture,' but they established architectural standards which were followed on a smaller scale throughout the surrounding countryside. A conscious design ethic was imposed over a wide area, and it influenced the design of small gentry's houses and estates, farmhouses of the stronger tenant farmer, and also stewards' and agents' houses.