Enlarge image
The Lawrence Family Album  (GS01/1) is a leather bound gilt-edged volume of photographs of portraits of various members of the Lawrence family, the local village, and the interior of and frescoes of Lisreaghan house.

In the late 1980's, the descendants of the Lawrence family sent the album, from Australia,  to the Australian Embassy in Ireland, for deposit in an appropriate repository.  The Embassy then sent it to Galway Public Libraries where it is currently housed. It can be viewed by appointment only.

Much of this site is a direct transcription from the Family Album with its images. Spellings and punctuation are as presented in the Album.

A 20 x 15 foot copy of this painting, originally painted by Pietro da Cortona circa 1628 and entitled "Rape of the Sabines", hung on the wall of Aurora Hall in Lisreaghan house. This photograph is the copyright of Nick Hunter.

The house was located in the townland of Belview, in the electoral division of Lawrencetown and in the barony of Longford. The estate became encumbered from the late 1850s and the family finally left the estate at the turn of the century. The house was destroyed in the 1920s and no ruins survive.

In the Landed Estate Courts Rental details of 1852 the lands of Belview or Lisreaghan are described as:

'very good; and the greater part of it is good pasture and meadow land. Mr Lawrence has set the greater part of the Demesne, which is beautifully planted. The Timer is from 10 to 100 years old. The House is commodious and good. There is an oramental piece of water in front of the House. The entire makes a handsome Demesne.'

The Rental lists all the lands of Walter Lawrence to be sold in the Court of the Commissioners in November 1852. It gives details of the lands held in various townlands, such as Cloonbanum North, Largan, Bellview, Lissafarsoon, Lawrencetown and Craughwell, listing the tenants, yearly rents and quantity of land. 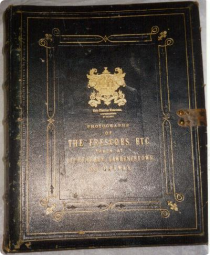 The album includes biographic detail on the leading family members together with a brief family history, and an account of the geography and history of Lawrencetown. The front cover also includes engraving of the family crest.

This wonderful album includes photographs of: