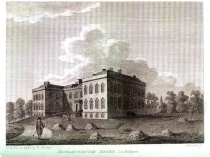 This is on the river Barrow, and at some distance from the town, to which it gives name; and which, within a few years, has been greatly enlarged by stores and new houses. This is one of the happy effects of inland navigation; the grand canal runs by this town.

It is said St. Abban founded here a sumptuous abbey, and gave it the privilege of a sanctuary; but it was St. Evin who, in the 7th century, brought monks from South Munster, and settled them here. However, the ancient church going to decay, Dermod O'Dempsey, King of Ophaley, about the year 1177 granted to the Monks the present site whereon to erect an abbey in honour of the Virgin Mary, and other possessions of considerable value contiguous to it, the copy of which charter is in the English Monasticon.

The Abbot, who was of the Cistercian order, had a seat in Parliament among the Barons of the realm. On the suppression of religious houses it was granted to Lord Audley, who assigned it to Lord Viscou nt Ely; it afterwards came into the Marquis of Drogheda's family, wherein it now is, who beautifully repaired, or rather new built it, for none of the ancient abbey is to be seen. The front is square with projecting wings, the portico and every part in th e Gothic style. It stands in a demesne of eleven hundred acres, and is one of the noblest country seats in Ireland.

In this abbey was anciently preserved St. Evin's bell, called Bernan Emhim, which was committed to the care of the Mac Egans, hereditary chief justices of Munster, and in all causes was solemnly sworn on by the tribe of the Eoganachts. So true is it what Giraldus Cambrensis records in the year 1185-"Ut sacramenta super Campanas, bajulas baculosque sanctorum longe magis quam super Evangeli et proestare, vereantur Hiberni, et pejerare"

This view, which represents the south-east aspect, was drawn by lieutenant Daniel Grose, anno 1792.