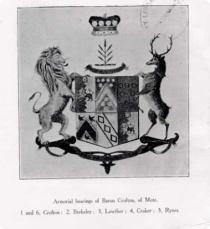 The Crofton estate in the townland of Ballymurray in Co. Roscommon was first granted to John Crofton during the reign of Queen Elizabeth. He was the first occupier, having been appointed Auditor General in 1584. In addition to this estate he also obtained extensive grants of lands elsewhere in the county as well as in Leitrim and Sligo. It was not until 1661 that a Crofton obtained a title however, when Edward became a Baronet to Mote for services rendered to Charles II during the Cromwellian rebellion.

The total holdings of the Crofton's in Co. Roscommon consisted of 11,053 acres, according to the Bateman Edition of Great Landowners of Great Britain and Ireland in 1883. The size of the Mote Park estate in Ballymurray consisted of c. 7000 acres. Although this was a sizeable estate, when compared with others such as the Essex properties consisting of the town of Roscommon itself and extensive lands to the north, totalling some 36,000 acres, it clearly was not the largest.

Any estate, no matter what its size needed to have a big house and Mote was no exception. Mote Park House was built by the Crofton family in the later half of the eighteenth century, preceding the Castle of Mote erected by the family in 1620.

"Mote Park, a Time and a Place" Documentary Trailer

http://vimeo.com/mimarmedia/moteparkatimeandaplacetrailer ‘Mote Park, a Time and a Place’ is a documentary about the Landscape, Architecture, Biodiversity and History of a wooded amenity area in Roscommon, Ireland. Beloved by its locals though relatively unknown elsewhere, it’s a record of the people who once walked its lands, its residents and those who enjoy the hidden treasure that is Mote Park. Produced by Mimar Media, a Roscommon based Production Company, this film chronicles some of the history of the area including its time as a landed estate, introduces viewers to its vibrant raw beauty and diverse wildlife, interviews those with stories to tell before another generation passes and meets with the major stakeholders of its resources to ask them of their plans for the future of Mote Park.