Parslickstown House and the Carr Family 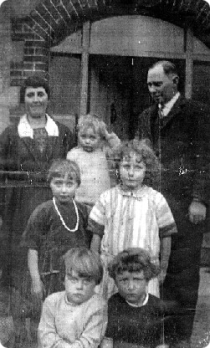 From the author's collection
Enlarge image

According to local folklore, a man about to be executed in England enquired from the gallows if there was anyone from Mulhuddart present. When a member of the public gathering replied that he was, the condemned man instructed him to return to his village and dig at Blairs' Well where he would find a pot of gold. It is alleged that this gold was used in the purchase and construction of Parslickstown house.

It is unclear whether this account is a work of fact or of fiction, but what is certain is that from the 1840's on Parslickstown house and its' 165 acre farm was owned by Mr Frank Carr, head of the Carr family.

The entrance of the house opened out into a large hall and staircase, with doorways at either side leading to a drawing room and an immense dining room. At the end of the hall was the kitchen. A pantry and a dairy were also located on the ground level of the house, as was a second staircase to the rear of the building that also led to the stylish landing and its' five master bedrooms.

A prime example of a prosperous nineteenth century farmhouse, Parslickstown house was situated on top of a hill and overlooked its' considerable land holding.