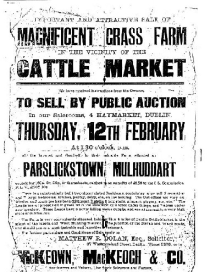 This is the poster that announced the sale of Parslickstown House and lands on the 12th of Febuary 1955, by McKeown, MacKeogh & Co. Auctioneers of 4 Haymarket, Dublin.

This is the poster that announced the sale of Parslickstown House and lands on the 12th of Febuary 1955, by McKeown, MacKeogh & Co. Auctioneers of 4 Haymarket, Dublin.

In 1955, Parslickstown House and its' entire estate was sold at public auction. Tha Carr Family vacated the property and were never to possess it again.

The house functioned as a farm guesthouse for some time, but was eventually left unoccupied as the full value was extracted from the land surrounding it. As the house lay vacant it fell into a state of ruin, and served no purpose other than providing temporary accommodation for the squatters who resided there. Housing estates and a new community sprung up around Mulhuddart and the area developed at the same rapid pace as the rest of the greater Blanchardstown area.

Parslickstown Houses' very existence came into question when in 1985, a fire almost destroyed the house completely. This was, however, to spark a refurbishment plan, sponsored by the Department of Labours' Social Employment Scheme.

Work began in August 1986 and was carried out by a team of 25 workers. The aim was to provide a home for a new community enterprise complex. The Greater Blanchardstown Development Project resides there today.

Parslickstown Houses' new role is vital to the community around it, the once derelict site is now a hub of activity once again. This also contributes to a certain sense of continuance in the houses' history, and its function in the community. Particularly when one considers the privately sponsored famine relief projects and land league rallies which took place there in its long and illustrious past.