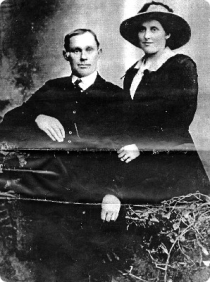 This is a portait photo of Tim and Ciss Carr. Tim Carr was the last master of Parslickstown house and his widow, Ciss, was the last Carr to own it

This is a portait photo of Tim and Ciss Carr. Tim Carr was the last master of Parslickstown house and his widow, Ciss, was the last Carr to own it

Famine times in the mid nineteenth century hit rural Ireland hard. It is now widely estimated that one million people died and a further one million were forced to emigrate during that time. The failure of the potato crop, due to blight, prompted a downward spiral which resulted in a vicious circle of poverty, hunger and disease.

Frank Carr is said to have foreseen the possibility of the potato crops' failure, and the ensuing impoverishment that would be experienced as a result. With this in mind he planted a considerable crop of turnips on his land. Mulhuddart, then very much a rural outpost of county Dublin, was saved from the worst ravages of the famine and it is noted that there was no mass starvation experienced there as a result of the potato blight.

In around 1880 a grand Land League rally was held on the front lawn of Parslickstown House. Charles Stuart Parnell attended the rally and later had lunch at the house. His lunch almost died a premature death according to tradition as one of the family dogs was caught only seconds away from stealing it, having crept in through an open window.

Parnell would have regulary passed through Mulhuddart on his way to and from his constituency of County Meath. This would not have been Parnells' sole visit to Parslickstown, merely his most formal. Francis Carr, then Master of Parslickstown House, was an active supporter of the Land League. This would not have been the case for the vast majority of large landowners at this time, who feared Parnells popular support and calls for fair and just land laws.

The value of popular myths and folklore is not for their historical or factual accuracy. They do, however, record and convey popular attitudes and opinions in a way that census reports and land valuations cannot. With this in mind, it is not surprising that the Carr familys' humble roots are often the subject of legends and stories from the area. This provides an easy and obvious explanation for thier humanitarian and charitable acts during a time of such deprivation.