A large amount of correspondence is often found in estate papers. The correspondence may concern the running of the estate for example, the collecting or setting of rents and the purchase of materials and labour. Occasionally more general national or local external matters are discussed. Correspondence may be or from to a landlord, a land agent, a tenant, or another person or organisation connected to the estate.

43 Copy of a letter from John Purcell, Egmont Estate Land Agent, to Lord Egmont, Landlord. Purcell answers Egmont's request for an 'account of the state of this country, and the sentiments of the people'. 'I am sorry to observe, that the ready Disposition of the lower orders of the people to give opposition to the Laws, and the spirit of insurrection they manifest in every occasion are sufficient to alarm the landed interest of this kingdom...'. There are appeals for the repeal of the Penal Laws. The Parliament repealed those laws and has granted them the elective franchise. 'An Act for establishing a Militia of fifteen or sixteen thousand Men has lately been passed, was opposed by the lower orders of People...such the opposition in the North of Ireland that the mobs have attacked the Gentlemens Houses for the purpose of taking away what fire Arms they could get. In the county Kerry, lately, the military were compelled to fire on the mob; numbers were killed and wounded before they dispersed- I am of the opinion the success of our arms against France will tend to allay the Ferments of this Kingdom." In this county only officers have been appointed to militias and the "loss of publick credit has been severely felt throughout this kingdom, the trade of Cork at a stand." (3 July 1793) (Ryan-Purcell Estate Papers) 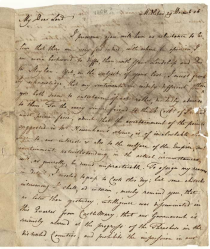 70 Letter from William Coppinger, Landlord, Midleton, County Cork, to Rt. Revd. Denis McCarthy. Coppinger refers to Roman Catholics and 'Newenham's scheme'; Government's alarm at the progress of the Thrashers in the disturbed counties'; invasion from Spain and the return of General Crawford's expedition and the light battalion of the German Legion on its way to Bantry. (29 December 1806) (Newenham Estate Papers) 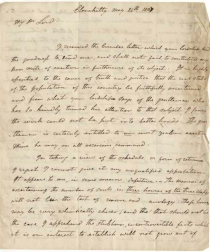 67 Letter from William O' Brien, Clonakilty, to the right Rev. Dr. Mc Carthy, Bishop. 'My Dr Lord I received the Circular letter which your lordship had the goodness to send me, and shall not fail to contribute my poor mite of exertion in furtherance of its object. It is highly essential to the cause of truth and justice that the real state of the population of this country be faithfully ascertained...' . He states that the clergy should have impressed "...on their minds that, as they are answerable to God for the souls of all, they, as good and faithful shepherds should know all their sheep- and the good shepard calleth his own sheep by name." (24 May 1807) (Newenham Estate Papers)

328 Letter to 'Dear James', James Grove-White, Landlord, from Nicholas Green Evans, stating that tenants in Ballinree are taking turf to pay their rent and that '... there are more houses on the denomination of Ballinree than on the remainder of the Estate, for several poor people take a house and garden, for the sole purpose of cutting Turf as for the use of the premises, which they afterwards sell to pay their rents...' (27 April 1821) (Grove White Letters) 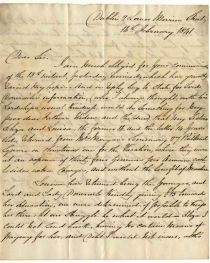 99 Letter from John St. Leger to William Hill, agent of Lord Doneraile. St Leger seems to be a nephew or other kinsman of Doneraile's. 'I am much obliged for your communication of the 13th instant, yesterday received which had greatly raised my hopes - and in reply beg to state for Lord Doneraile's information, {who I always thought, with his Lordships usual Kindness, would do something for my poor dear Father's Widow and Children}.... '. Requests money to support the family. Expenses include educational costs, '... Louisa has returned...it was and is our most anxious desire to keep her at school for a year or two longer, her education having been neglected from residing in the Country...My Brother James is a Mate (on board the Calliope)... and is now in China I believe, as he was to sail on the 1st July from Valparadiso...My second brother William is a Sub Inspector of Constabulary, stationed in Mullingar...and was about to get Married, but for my poor Father's death... I have now answered all the queries, which I trust will prove satisfactory to Lord Doneraile, and by which his Lordship will perceive my Mother and Sisters are thrown on me, who can with difficulty support the character and appearance of a gentleman..." (12 Feburary 1841) (Doneraile Estate Papers) 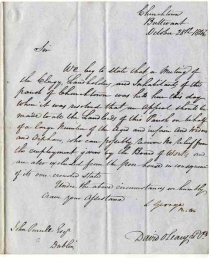 117 Letter from Mr. George, Rector of Churchtown and David O'Leary, Parish Priest, Churchtown, Buttevant, county Cork, to John Purcell, landlord, Dublin, 'We beg to state that a Meeting of the Clergy, Landholders and Inhabitants of the parish of Churchtown was held here this day when it was resolved that an appeal should be made to all the Landlords of this Parish on behalf of a large number of the aged and infirm and Widows and Orphans, who can possibly receive no Relief from the employment given by the Board of Works, and are also excluded from the poor house in consequence of its over-crowed state. Under the above circumstances we humbly crave your assistance'. (28 October 1846) (Ryan-Purcell Estate Papers) 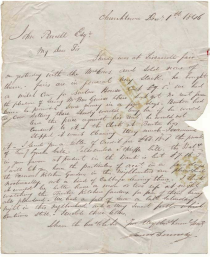 131 Letter from James Dennehy, estate employee, Churchtown, to John Purcell, Landlord, Dublin. 'Sheedy was at Liscarroll fair on yesterday with the [Milch] Cows and sold none of them, fairs are in general very slack... the Clock at Burton has stopped it wants cleaning very much... the Farmers Kitchen Gardens in this neighbourhood are plundered nocturnally, not a head of cabbage leaving there...' (1 December 1846) (Ryan-Purcell Estate Papers) 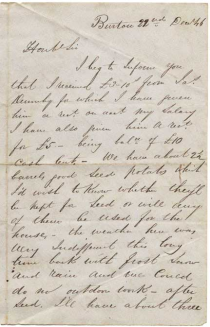 133 Letter from Arthur O'Keeffe, Steward, Burton House, Churchtown, to John Purcell, Landlord. 'Denis McAuliffe tells me you promised him a bag of wheat.- will we keep a bag of it for the use of the house ?... It may be well to remark that potatos are very scarce, and what little people hold they are keeping for seed. they are extremely dear...I am of the opinion that it would be wrong to use the potatos they being so very scarce & dear. We have not a grain of oats for the horse...' (22 December 1846) (Ryan-Purcell Estate Papers) 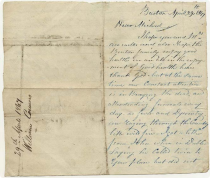 162 Letter from William Connors, to 'Dear Michael' describing famine and disease conditions in the locality, '...our constant attention is in Burying the dead, and attending funerals every day, as fever and Dysentry are raging through the Country like wild fire...how happy are those tenants who devise under Mr. Purcell...'. (29 April 1847) (Ryan-Purcell Estate Papers) 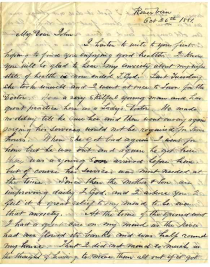 151 Letter from Patrick Dempsey, Riverbrin, St. Pauls, U.S.A., to 'My Dear John' (John Purcell). 'I hasten to write to you first hoping to find you enjoying good health...you will be glad to hear my anxiety about my wife's state of health is now ended T. God... I am beginning to think I am becoming an ancient member of society having two young daughters and a young son to look out for. There is one satisfaction if the Lord spares them, they will have a better opportunity here of advancing themselves than ever they could in the old Country... This Winter will be bad on the poor people as everything is so unusually dear, the potatoes are now a Dollar a bushell that could be got this time twelve months for twenty five cents... but all our great business men here in St. Pauls made their money in Shop business and as trade is yearly increasing there is every hope of people succeeding by perseverance and correctness... Since I last wrote to you I have got appointed as Collector for the Globe Newspaper... I see by the Telegraph reports in the papers here that the English Government is now determined to stamp out the League [Land League] business and are taking active measures to surpress it. It would be better for the people who are not satisfied with what Government is anxious to do for them to quit the old Country and come here where there is no contention and every chance of them bettering their condition... May the Lord protect you from all harm that is my constant prayers for you...' (26 October 1881) (Ryan-Purcell Estate Papers) The full letter is also available in PDF format to download. Adobe Acrobat Reader is required. 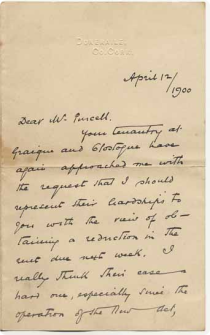 169 Letter from [Canon] P. Sheehan, Doneraile, to 'Dear Mr. Purcell'. 'Your tenantry at Graigue and Clostogue have again approached me with the request that I should represent their hardships to you with the view of claiming a reduction in the rent due next week...their case is a hard one, especially since the operation of the New Act which now brings up the Rates to about 30 per cent or more...there is no doubt their holdings are very wretched and themselves very poor...I am convinced that there is but one satisfactory solution of this ever-vexed question - a solution that is rapidly approaching: and I should be very glad if landlord and tenant could meet, and settle the question of purchase on equitable terms...best regards to Mrs Purcell & Family, Always sincerely my Dear Mr Purcell...' (12 April 1900) (Ryan-Purcell Estate Papers) 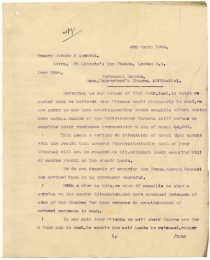 047 Letter from Walter Thornhill & Son, representatives of the Colthurst Estate, to Messrs. Surman and Quekett, London, representatives of Colhurst Estate creditors. Thornhill informs them that tenants on the Ballyvourney estate are holding out for better terms. The delay of the sale of this portion of the estate represents a sum of approximately Ł9,000. This sum was to be used to pay many of the creditors to the estate. As a result of this failure to sell the creditor is asked to make a settlement. Also there is concern that "the bonus" will not be payable as a result. The "bonus" was a 12% bonus given to the landlord on top of the purchase price of an estate if he sold the estate in its entirety under the 1903 Land Act. (4 March 1909) (Colthurst Estate Papers)