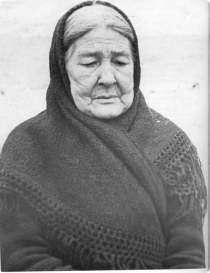 In the remote, windswept Great Blasket Island lying in the Atlantic Ocean off the south-west coast of county Kerry , entertainment continued to be community based for as long as the island remained inhabited. [1]

The custom of house visiting provided a structure for night-time entertainment of which storytelling was a part. This was the context in which Peig Sayers narrated tales while she lived on the Island , and afterwards in Baile Bhiocáire, Dunquin, after her return to the mainland in 1942.

The storytelling occasions when Peig, seated in front of the fire, in her home in Baile Bhiocáire, entranced her audience, were vividly recalled by Seosamh Ó Dálaigh in his diary accounts of his collecting sessions with her   and in W. R. Rodger's 'Introduction' to An Old Woman's Reflections (1962, xii-xiv), the translation by Seamus Ennis of her autobiographical account, Machtnamh Seana-Mhná (1939):

‘I wish I had the ability to describe the scene in Peig Sayers's home in Dunquin on a winter's night when the stage was set for the seanchaí’, writes Seosamh Ó Dálaigh to me… ‘When the visitors arrived (for all gathered to the Sayers house when Peig was there to listen to her from supper-time till midnight) the chairs were moved back and the circle increased. News was swapped, and the news often gave the lead for the night's subject, death, fairies, weather, crops.' All was grist to the mill, the sayings of the dead and the doings of the living, and Peig, as she warmed to her subject, would illustrate it richly from her repertoire of verse, proverb and story...

Great artist and wise woman that she was, Peig would at once switch from gravity to gaiety, for she was a light-hearted woman, and her changes of mood and face were like the changes of running water. As she talked her hands would be working too; a little clap of the palms to cap a phrase, a flash of the thumb over the shoulder to mark a mystery, a hand hushed to mouth for mischief or whispered secrecy. 'When the fun is at its height it is time to go', runs the Irish proverb; and when visitors went each night Peig would draw the ashes over the peat-embers to preserve the fire till morning, reciting her customary prayer: 'I preserve the fire as Christ preserves all. Brigid at the two ends of the house, and Mary in the centre. The three angels and the three apostles who are highest in the Kingdom of Grace , guiding this house and its contents until day.'

[1] For the Blasket Islands , their writers, works concerning them, and the evacuation of the Great Blasket, see: Mac Conghail, Muiris, The Blaskets. People and Literature, Dublin 1994.

Previous - Tellers and their Tales in the Gaelic Tradition
Next - Mrs. Bríd Costello