Folklore is much more than the old man by the fireside telling stories. Folklore is there in every church or secular wedding, with the couple deciding what aspects of tradition to keep, and which to jettison. It is fundamental to the jokes that whizz from one person to another by text message or on the internet. It persists through the ancient ritual folk dramas of strawboys and mummers. Folk beliefs, more commonly called “superstitions” occur when we salute the lone magpie for fear of bad luck, or when we avoid walking under ladders. When people share stories about encounters with ghosts – hauntings, psychic intuitions or sixth senses, or what they believe to be a supernatural encounter with a deceased family member – there is an invisible line linking us back to the very first human beings who became aware of their own mortality, that moment of consciousness explained in traditional myths such as the apocryphal tale of Adam and Eve becoming aware of themselves in the Garden of Eden. 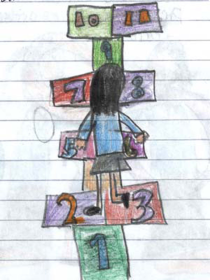 An illustration of the game of hopscotch

Illustration of the game of hopscotch in a copy book

An illustration of the game of hopscotch

Illustration of the game of hopscotch in a copy book

To the children who take part in games on the street or in their homes – hopscotch, hiding or chasing, or any game which has endured across the generations, usually passed from a slightly older generation of children to their slightly younger peers – it is the natural, unseen rhythm gently guiding their play.

To anyone who has ever told or heard an “urban legend”, a story about recent events (or alleged events), told as true and with a twist in the tale, the vibrancy of folklore is clear. These are dark tales of abducted women and children, revenge wreaked by jilted lovers, stolen kidneys, and encounters with dangerous animals. They are humorous stories of mistaken identity, unplanned fortunes, and unfortunate accidents.

To anyone who has ever sat down for a Chinese meal, an Irish stew, an Italian pasta, an Indian or Thai curry, or the Southern fried chicken that forms a cornerstone of the soul food found in the southern United States; you have eaten generations of accumulated traditional knowledge and wisdom about food. Recipes passed down by word of mouth and through cookbooks combine local ingredients and natural ingenuity to create the dishes that represent a culture and, like all aspects of folklore, constantly change and develop.

To anyone who has ever listened to music: in the beginning, all music was folk music. Modern pop music emerged from a synthesis of rhythm and blues (rooted in African folk music), Irish and English folk music , gospel, blues, and other folk styles. Country music also has its roots in the folk tradition.

As well as being traditional – usually defined as a custom, practice, or belief that has passed through at least three generations - folklore is at once informally transmitted, learned through life rather than formal education; anonymous, in that the author of a particular story, custom, or event is unknown; communal, in that it belongs to a group of people, whether they are an ethnic group, a nation state, a subculture such as Goths or punks, a profession, or a neighbourhood. A folk group consists of two of more people who share something in common – language, occupation, age, sexual orientation, residence, social group – and who share traditions that they consider important to their sense of identity. Any aspect of folklore is also both stable and variable. A particular folktale, wedding, Christmas celebration, folk cure or recipe will contain core elements that make it instantly recognisable, but will also be substantially different each time it is told, marked, practiced or made.

Irish folklore owes a major debt to the work of the Irish Folklore Commission (1935-1971) which, under the direction of James Hamilton Delargy, gathered folklore from across the island of Ireland and assembled it in a an extensive manuscript and audio archive. The Commission was succeeded by the Department of Irish Folklore in University College Dublin, and is now known as the UCD Centre for Irish Folklore and the National Folklore Collection.

Increasingly, “Irish folklore” is changing, becoming the “folklore of Ireland” or “folklore in Ireland” – as more immigrants bring their own cultures and as we access information about other people at the touch of a button.

Previous - Feature: Folklore of Ireland
Next - The Life Cycle