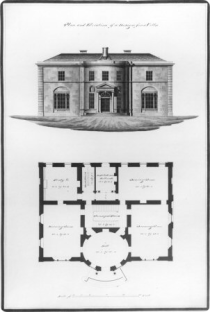 A print of Castlegar, Co. Galway.

A print of Castlegar, Co. Galway.

Sir Richard Morrison, the notable Irish architect, brought up under the influence of the grand classical tradition, from which he departed later, engaged in the building and remodelling of country mansions. The style, which he adopted, was in accordance with the taste of the time.

"In his exteriors he imitated mediaeval castles and abbeys, or preferably Tudor mansions, and sometimes combined the two. His interiors were richly decorated with ornamental carvings, the walls were wainscoted in oak, tracery windows were filled with stained glass, and ceilings ornamented with carved beams and gilt pendants. The halls were large and in the baronial style; musician's galleries were often added. One of the most noteworthy of Morrison's creations was Castle Gar, possessed by the Mahon family."

Dutton in his Survey of County Galway mentions the Rev. Dean Mahon and Lord Clonbrock as among the few gentlemen who cultivate green crops. He adds that the gentlemen he mentions cultivate Norfolk, Swedish, and other kinds of turnips, generally in drills. They also usually plant rape, vetches, and may have begun to propagate mangle wurzle, but little or no carrots or parsnips for cattle.

Bryan Mahon possessed in 1665 considerable property in the neighbourhood of Loughrea. His wife was Maggie Power. James, the elder of their two sons, became ancestor of the Mahonsof Beech-hill, Co. Galway; their son Bryan was Lieutenant in Clanricarde's Regiment. He was ancestor of the Mahons of Castlegar and his commission as Captain, date 5th April, 1690, is at present at Castlegar.

"In the neighbourhood of Ahascragh there are two fine demesnes, one Castlegar, the mansion of Sir Ross Mahon; the other, Clonbrock, the seat of the Lord of that ilk (as the Scotch say). They are both very different indeed from the middleman's demesnes I have lately described. As far a great extent, full grown timber, and roomy but not handsome houses, kept in excellent order will go, they are fine establishments. Both owners were from home, as indeed I may now say for once was every owner of a fine demesne, except one, that I passed during my whole tour. I observed that the soil was poor and hungry in their demesnes. Though it was the latter end of May, the surface was covered with a thick vesture of moss. I had, before I visited this quarter, imagined that the central plains of Galway were of a finer quality of land than what I now found them. The finest oak-wood I have seen in Connaught is at Clonbrock; the timber seems to stand in its natural habitat, and is full grown. Part of it was being cut down, and observed that contrary to the Irish practice, the bark was stripped off before the tree was felled; this I believe, is the practice in the royal forests in England and improves the quality of the timber. I saw here pheasant running along the skirts of the wood. This rare species of game being abundant here showed that his lordship was careful of manorial rights. I confess I would rather have seen a fine peasantry than a pheasantry; and I am not sure that I saw any thing like the former. In the immediate vicinity of the great house, I saw some pretty porter's lodges, etc., etc., but outside of the demesne (on land, which no doubt was still his lordships property) I did not observe any great improvement in the dress, the houses, or the tillage of the people. No doubt there is a slow process of improvement going on here, as in every other part of Connaught, and a change is coming over the language, and dress and the habits of the people. Respecting this very district and property of Lord Clonbrock's, I remember being told a circumstance which occurred half a century ago, and was witnessed by a relation of mine then on a visit at Clonbrock. The then Lord was getting home his year's full, and as was the custom, the tenantry, according to their villages, took it in turn, day after day, to draw home, with man and horses, the lord's turf; and during the process each set of villagers got their dinners in the servants hall; but when it came to one set, which were located far off in an island, surrounded by red bogs, and when they were called to come in to the house to dinner, nothing could persuade them to do so - in Irish, their only language, they declared that they dared not do so, lest the big building should fall upon their heads, while under it. Such barbarian ignorance, if ever it was shown, could not now at least be exhibited. Lord Clonbrock is, I am told, a great improver of red bogs, and I regretted much that my time and engagements did not allow me to go and inspect what he had done - but when I asked was the improvement finished, is the red bog become good pasture, meadow, or tillage land, I was told that it was not so yet, and it was more than hinted that his lordship was growing tired of his speculation."