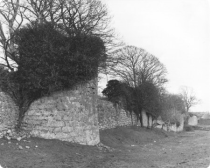 A photograph of Athenry town walls.

A photograph of Athenry town walls.

The Friars, on the 11th February 1298 applied to the Lord Chancellor for a mandamus, which was granted, directing the Archbishop "that, instanter and without any manner of delay whatsoever, he recall his proclamation and inhibition, and further that he abstain from doing such grievances in times hereafter to come." The Archbishop replied:

"The he never at any time gave offence to the Friars, but on the contrary it was always his interest and purpose to defend and favour them in charity and love, if their own demerits did not stand in their way; and if he had done any injury to the said reverend community by his said proclamation and inhibition, he would, with all speed, cause the same to be revoked, and as to the Archdeacon, he would cause him to undo whatever he had unduly done, and would inhibit him for the future from repeating the grievances complained of."

To this return the plaintiffs, by their lecturer, Adam de Large and the King's attorney-general John de Ponte, replied that the said Archbishop had made and published said proclamation and inhibition, that the plaintiffs had applied to him for a remedy, and he refused them, and upon this replication they offered to join issue. Upon this the Archbishop gave security that he would compel the Archdeacon to recall all that had been done; and if he did not do so , he granted that the Sheriff of Connaught might distrain him (the Archbishop) until the same were done, and so ended this phase of this once memorable case. But the Friars next proceeded in the King's Bench against the Archdeacon and damages were laid at 1000. His plea was one of justification upon which issue was joined and the case set down for trial. When it was called, however, the defendant did not appear.

A precept then issued to the Sheriff of Connaught commanding him to distrain the Archdeacon, by his lands and goods, and to have his body before the Chief Justice on the Quindecem of Easter next following. Nothing is known of the sequel if any.

Previous - Esker College Timetable, 1844
Back to