How Dunmore got its Name 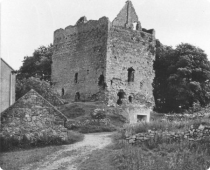 A photograph of Dunmore Castle in Dunmore, Co. Galway.

A photograph of Dunmore Castle in Dunmore, Co. Galway.

Dunmore, the great fort or dun, gives the name to the barony of Dunmore. It was the place of a strong fortress of the kings of Connacht, and there are still to be seen the remains of an extensive castle, said traditionally to have been built by Hosdech (Hosty) MacMembric, or Mebric (now Merrick).

This castle was taken by the Anglo-Norman, Birmingham's, barons of Athenry. In 1249 it was burned by the army of the king of Connacht, and in the reign of Queen Elizabeth, the Birmingham's being in arms against the Queen, Sir Henry Sidney in 1569, besieged and took the castle.

It was finally dismantled in the time of Cromwell.

St. Patrick is said to have built a monastery in Dunmore, upon the site of which a friary for Hermits of St. Augustine was afterwards founded by Walter de Birmingham, Lord Athenry, in 1425. After the Reformation part of the friary was converted into a parish church of the establishment, the rest being levelled, now forms the market place.