Built by the O'Connors

After his defeat of Amalgaid O'Flaherty King of West Connaught in 1049, Hugh O'Connor, King of Connaught made Tuam his principal stronghold and this event was directly responsible for the subsequent rise in importance of the town. We find no reference to the Cathedral, however, until 1134 in which year Tighernach states that "The Cathach of St. Iarflaith was desecrated by the Dalcassians". The Annuals of Lough Ce also refer to this incident which evidently occurred during the campaign against the Northern half of Ireland by the armies of Irish and Danes lead by Conor O'Brien and other chieftens. The party who actually plundered Tuam were lead by Cumea-more MacconmaraKing of Ibh. Caisin in Thomond, who was killed the following year when the Desmonians under Cormac Mac Carthy invaded Thomond. 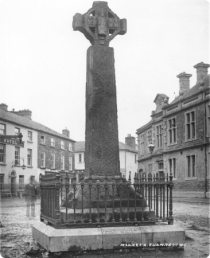 A photograph of the Cross at Market Square, Tuam; the photograph was taken on 5 February, 1969 and is part of the Lawrence collection at Galway library.

A photograph of the Cross at Market Square, Tuam; the photograph was taken on 5 February, 1969 and is part of the Lawrence collection at Galway library.

This Church was replaced by a great cathedral built by King Turlough Mor O'Connor but the actual date of the erection is not known. What evidence there is, however, suggests that it was built between the years 1128 and 1150. Ware states that it was built "about the year 1152 by the Archbishop Edan O'Hoisin by the aid and assistance of Turlough O'ConnorKing of Ireland". Petrie disagrees with this date however, and he bases his argument upon a consideration of the inscription on the High Cross standing in the market place in Tuam and of which he states:

"That this cross was of contemporaneous age with the church and was intended as a memorial of its founders or rebuilders there can be no reason to doubt. Such was the cross of the Scriptures at Clanmacnoise which ... was designed as a memorial of the erection of the great church there and such also was the triple shafted cross at Cashel"

The inscriptions on the base of the Tuam Cross indicate that it was erected during the reign of King Turlough O'Connor (1128, 1156) and one inscription in particular asks for "A prayer for O'Ossin; for the Abbot; by whom it was made". This Abbot was of course, Hugh O'Hoisin the successor of Maurice O'Nioc who died in 1128. He subsequently became Bishop upon the death of Maurice O'Duffy in 1150 and first Archbishop of Tuam by enactment of the Synod of Kells in 1152. this definitely places the date of the cross during his abbacy which terminated in 1150 and if we accept the suggestion that it was made to commemorate the building of the cathedral, the latter edifice must have been erected some years earlier.

Next - Architecture of the Cathedral