Church of Saint John the Evangelist

The orginal Roman Catholic Parish Church of St. John's was situated in Maudlin Street. This earlier church's construction commemced in 1840 and was finished by 1847. It was the last in line of several churches or Mass Houses that had existed in Maudlin Street. The stone from this earlier church was later used in the building of the Dr. Collier Wing of St. Kieran's College that opened in 1956. The site of the new St. John's was donated by the Marquis of Ormonde. The foundation stone was laid on the 22nd May 1897 and consecrated on the 20th of June 1908.

The original design was by William Hague, on his death, it was completed by William H. Byrne. It was built in the neo-Gothic style popular at the time. Difficulties encountered early on meant that the original spire in the design was omitted to ensure the stability of the building. The large sculptured panel over the front door incorporates an eagle, symbol of St. John the Evangelist. 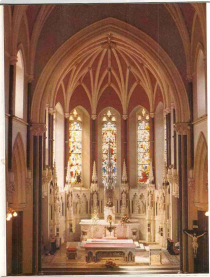 Main Altar of the Church of St.John the Evangelist, Kilkenny City

Main Altar of the Church of St.John the Evangelist, Kilkenny City

The church is often known as the O'Loughlin Memorial Church. This commemorates Thomas O'Loughlin of Sandfordscourt. Thomas' uncle Martin has made his fortune in the Australian gold rush. On inheriting this fortune Thomas carried out his uncle's wishes to build a church in his native diocese of Ossory. He donated Ł50,000 towards the construction of St. John's. He was later made a Papal Count in recognition of his generosity.

Previous - The Priory of St. John the Evangelist
Next - The Maudlin Castle.