John's Quay and its environs 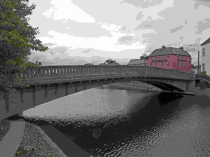 John's Parish Centenary Collection
Enlarge image
The origin of John’s Quay is supposedly linked to the building of the Kilkenny Canal. In order to receive a grant from the government, the committee building the canal had to show that the river was in use. A boat was said to have been transported overland and docked at the east bank. of the river, so the “quay” became a local joke. It can not be confirmed whether this story is true.
The flooding of the Nore has been quite destructive throughout the history of the City. In 1487 Green’s Bridge was destroyed, in 1584 St. John’s Bridge was also destroyed by the rising Nore. The 2nd of October 1763 was the worst flood of all destroying both bridges, and destroying property to the value of Ł11,000.
The origin of the name the Lake can be attributed to the flooding of the river. The lake area today consists of the area between Michael Street and the river. The lake in the 18th century consists of low lying grassland that lay between the river and the old mill stream, the stream flowing from the river at Greens’ Bridge to a point past the library. As the water levels rose the area flooded and so lead to the name.
The Lake School opened in 1908 and was the first school for infants and girls within the area. Previously they had had to attend the Windgap School with the boys. The school was located near the present building. The current School opened in 1937.
St Johns’s Bridge opened on 21st of November 1910 and was designed by L.G. Mouchel and constructed by J and R Thompson. Constructed of reinforced concrete it was the largest single arch bridge, constructed by the then new method of construction. It spans 43 metres long and replaced a bridge constructed in the 18th century. It is built on or near the site of a number of bridges that have existed over that area of the river since the 12th century.
Evan’s Ayslum also known as Evan’s Home was created by the bequest of Joseph Evans of Belevan, Ballyfrunk in 1818. It was to house the homeless of Kilkenny and could accomodate 12 men and 12 women. Joseph Evans also provided for the future financing of the institution. The building also housed the Model School and the County Library throughout its lifetime. It continued as a home until the 1990’s.
The Home Rule Club located on John’s Quay was founded on July 24th 1894 for “the advancement of Catholic and National Interests providing rational amusements for its members". It was started by a group of local individuals with likeminded political views. The building had previously held the NoreViewSchool which was established sometime before 1840. The school had imparted education through a new method of memory training developed by Dr. Gregory Von Fainaigle a German educationalist. 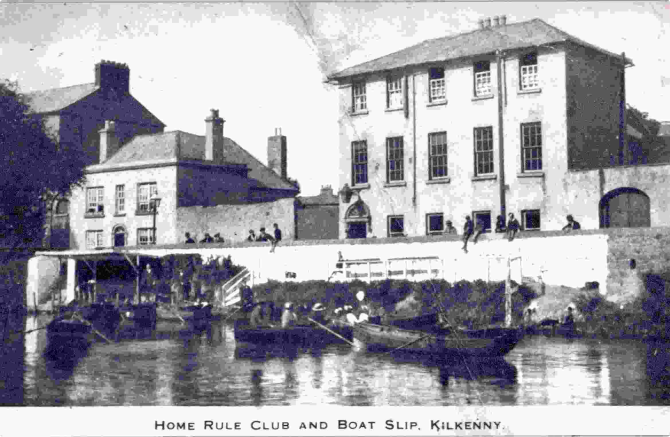 Previous - The City Library: a new beginning
Next - Education