The Priory of St. John the Evangelist 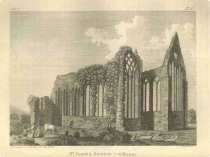 Prior to 1200, The Augustinians order of monks had had a presence in Kilkenny in John Street. In 1211, William Marshall, Earl of Pembroke granted by Charter in 1211 a new site in the present John Street for a new Priory. This new church was afterwards known as the Priory of St. John the Evangelist. In 1220 mass was said for the first time on the high alter in the Priory and in 1290 in the Lady Chapel of the same. Building continued on the site for many years. It is recorded for example in 1329 that a bell-tower collapsed. It is reasonable to assume that the original Priory was at least twice the length of the extant building. 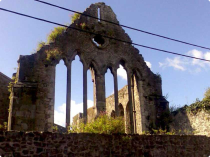 Side view of the ruined section of St. John

Side view of the ruined section of St. John 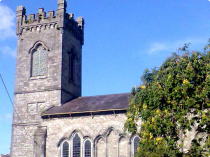 In 1540, The Priory along with the other monasteries was suppressed by Henry V111. The Priory itself and some of its property was transferred to the Corporation of Kilkenny. During the Confederation period, the site was granted to the Jesuits and part of it was also occupied by the Capuchins. After the end of the Williamite Wars, both orders were expelled from Kilkenny and the site fell into ruin. Around 1780, the nave of the main Chapel, its two towers and attendant buildings were demolished. The stone was used in the construction the first military barracks in Kilkenny.

In 1817 the still standing Lady Chapel was re-roofed and consecrated as the Church of Ireland Church of St. John's. This is the extant Priory.