This is a view of Portarlington town from the early-1900s.

This is a view of Portarlington town from the early-1900s. 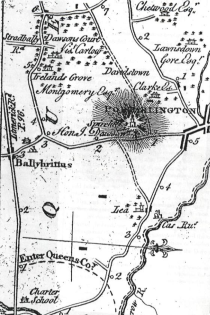 This map from 1777 shows the town of Portarlington and its surrounding areas.

This map from 1777 shows the town of Portarlington and its surrounding areas.

Portarlington lies hidden in the heart of the countryside unknown to most tourists, yet it reflects centuries of Irish history, architecture and lifestyles. Undoubtedly, this area is paradise for the historian and the visitor who wishes to see the old, the new and the modern within a few square kilometres.

Originally the only significance of the town was its Tannery whose industry was so famous that the area was named after it - Cuil an tSudaire (Tanner's Nook).

The real centre of life prior to the 1660s was Lea - 2 miles on the Dublin road. A town there had centred around the famous Lea Castle built in the 1260s by the great-granddaughter of Strongbow.

The Castle was destroyed in the 1640s and the land of the O'Dempsey's Chiefs granted to Sir Henry Bennett, who built the present town of Portarlington into the natural curve of the river Barrow. Protected by the river on three sides, an artificial moat (channel) was built on the south side to keep out the disposed Irish who had moved into the surrounding bogs.

Later in the 1690s, the French Huguenots, who had fled from the persecution of the Religious Wars in France and fought in the armies of William of Orange, were rewarded for their services with grants of land or property in many parts of Ireland, including Portarlington.

These new settlers brought a very French style of architecture and life to the town, building their own church and schools. Some of these Huguenot houses are still to be seen in the town side by side with fine examples of Georgian, Victorian and Modern houses.