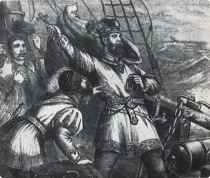 When news came of Red Hugh O'Donnell's death in Spain, Hugh O'Neill knew the cause was lost. He accepted the terms offered him by Lord Deputy Chichester. His lands were restored to him, freedom to observe the Catholic faith given, and a new patent of earldom was drawn up.

After hearing that the French ship procured by Cuchonnacht Maguire was at anchor at Rathmullan, O'Neill journeyed northward to join the earls of Donegal and Fermanagh. A plan was drawn up by James 1 of Scotland to plant Ulster with Scotch and English settlers. But the two earls were in the way, and had to be removed. They were charged with plotting against the Crown.

According to an anonymous letter to Dublin Castle, the seat of English rule in Ireland, O'Neill was planning to seize the castle, slay the Lord Deputy, and start a countrywide rebellion. Both earls were summoned to London to answer these charges; but O'Neill suspected a plot to assassinate them was afoot, and aware that planters were waiting to take his lands, he felt that safety alone lay in flight.

O'Neill went on horseback from his Dungannon castle, along with his wife, Catherine, his three sons, and other relations and attendants. So fraught and fearful was the journey that, when at one stage, Catherine fell from her horse in exhaustion, and begged not to go any further, O'Neill threatened to put her to the sword if she did not remount.

On September 14th, 1607, in approaching old age, O'Neill and the once-powerful earls of Ulster sailed from Portnamurray Bay, Rathmullan, Co Donegal. Off the coast of Connaught, the earls' ship went deep into the Atlantic to avoid the English ships in Galway. They ran into a storm which lasted for seventeen days.

O'Neill had a gold cross which contained a relic of the True Cross, and when they dragged it in the sea behind the ship, some relief ensued from the storm. Speculation has it that O'Neill got this relic from a portion venerated in Holy Cross Abbey in Thurles, County Tipperary, where it was customary to give a little portion to important visitors. Today, the abbey still holds a relic of the True Cross.