The age when bronze became the most important material for weapons and implements started in Ireland around 2000 B.C. and lasted until gradually supplanted by iron some 1500 years later. Its most significant monuments are stone circles which, however, began to be built during the preceding Late Stone Age, as was the case with one at Grange in the Lough Gur area of County Limerick. Their purpose remains enigmatic - the rounded orb shape suggesting possible use as the place for adoration of a sun-god, or where celestial observations could be made. Drombeg in Cork is a rare example of a stone circle having been used (secondarily?) as a burial place while, at the other end of the country, low stone circles were found to form a complex together at Beaghmore, Co. Tyrone, but without any apparent funerary function. 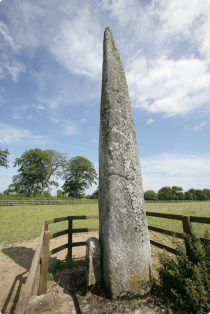 Single rows of stones, known as alignments, are found in Munster, but they keep their secret still as to what they were used for. Single standing stones, known as galláns or menhirs, are found in many parts of the country. One, at Punchestown - the tallest in the country at almost twenty feet - had a person buried close to its foot; others may have been markers along a road, or even boundaries - but some may have been erected comparatively recently to provide cattle with back-scratching facilities.