It was only around the fifth millennium B.C., with the advent of new farming stock bringing their own seeds and flocks with them, that people in Ireland began to settle down permanently in one place and discover for the first time the monumental power of stone. This new dawn they expressed in the form of megalithic tombs for the burial of the elite in Late Stone Age society who, in time, would be revered as the tribal ancestors legitimising ownership of the land. The impressive size, and seeming eternality, of the monuments they erected must have stood in awe-inspiring contrast to the simple wooden houses of the stone-builders themselves.

What two hundred years ago were called cromlechs (or 'curved stones') we now call dolmens, from two Breton words meaning 'stone table'. Academic musings of the eighteenth century saw them as altars for druidical sacrifice, though local folklore envisaged them more romantically as the beds of the young lovers Diarmuid and Gráinne on their flight from the wrath of an aged Fionn mac Cumhaill. We know now that dolmens are, more prosaically, burial places for the dead, Poulnabrone in the Burren producing 22 burials in a much-visited example that dates from around 3800 B.C. That at Legananny, Co. Down, looks appropriately as if three stones were carrying a coffin aloft.

Normally, a dolmen consists of between three and seven upright stones bearing a massive capstone  which has sometimes fallen because of its weight, as is the case at Browneshill near Carlow, where the capstone has been calculated to weigh one hundred tonnes. One can only wonder at the engineering ingenuity of the men who erected such stones, probably with the help of a temporary earthen ramp, and without being able to call on anything like the cranes or block-and-tackle we have today. The simple macho silhouette of dolmens has led to them being described as Ireland's first pieces of public sculpture!

Less dramatic, but more impressive in scale, are court cairns, large tombs consisting of a long roofed gallery of massive boulders covered with a mound of smaller stones, and opening off a semi-circular court where funerary rituals would probably have been performed. Their distribution is confined to the north and north-west of Ireland, where they had links with Scotland. Their builders (speaking a tongue, and being of a race, we cannot identify) would seem to have buried only a few, presumably special, individuals in the tombs, usually by cremation which is now again, after a lapse of thousands of years, beginning to become fashionable again. 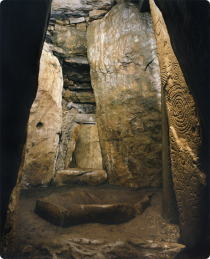 Passage graves are best known through their most famous example - Newgrange. They get their name because a passage leads from the rim of a round mound to its centre (or near the centre), where there is a burial chamber covered over with stones and earth. Other than the tumulus being round rather than angular, the system is similar to the pyramids of Egypt which, however, are likely to be later than most of the Irish passage graves. But the pyramids were designed as the tomb of a single individual, the deified Pharaoh, rather than for a number of (usually cremated) dead, as is the case with the Irish passage graves. Such tombs are spread along the maritime countries of Western Europe, and the idea for building them may have come northwards by sea to Ireland from Brittany, where some of the oldest known examples are found.

Newgrange itself is a masterful piece of Stone Age engineering, with the passage aligned to a point on the horizon where the sun rises on the shortest few days of the year, and shines for about 17 minutes through a narrow slit above the entrance right into the back of the burial chamber. It is the achievement of capturing the sun's rays in this way at the winter solstice that has made Newgrange famous throughout the world, but the tomb is also remarkable for the decoration of the stones, particularly that in front of the entrance, with its famous triple spiral (a motif that is also repeated on the back chamber of the tomb).

Newgrange is only one, albeit the most famous, of the approximately 300 passage graves in Ireland, which are found largely in the northern half of the country. There are two other important examples close by in the Boyne Valley, Dowth and Knowth, the latter of which has been extensively excavated to reveal what is perhaps the greatest collection of Stone Age 'art' anywhere in Europe. It differs from Newgrange as we know it today in having two separate burial chambers back to back, each very different in character. County Meath has another important cluster of partially-decorated passage graves forming a cemetery on the Loughcrew hills, otherwise known as Sliabh na Calliaghe.

Passage graves are usually sited on hill-tops, where they can be seen for miles around - the most notable instance being 'Queen Medhbh's grave' on the summit of Knocknarea in Sligo, a county very rich in passage graves. A number of these megaliths are grouped together at Carrowmore where excavations suggest that stone tombs may have been built there as early as the fifth millennium B.C. (that is, before 4000 B.C.).

Metal began to be worked in Ireland before 2000 B.C., and one type of megalithic tomb that may have been used by these early metallurgists was the wedge-shaped grave, which consists of a long stone-lined and -roofed gallery placed in a wedge-shaped mound of stones that narrows in width towards the back of the tomb. So-called Beaker pottery found in some of these tombs hints at links with copper-mining, particularly in Kerry, but other locations on upland limestone pasture, like the Burren, suggest that pastoralists, too, may have been involved in their construction. One of the finest examples is Labbacallee, Co. Cork, but they are also found in many other parts of the country.

The Legananny Dolmen is a three-legged example from the megalithic period of about 5,000 years ago and is the portal grave of a chieftain. The heavy stones would have been dragged some distance before being set in place. The three supporting stones are unusally long and there are slight traces of a cairn as well.

The Stone Age passage tomb at Newgrange is illuminated spectacularly each year at winter solstice. According to Irish mythology, Newgrange was one of the fairy mounds where the Tuatha Dé Danann lived. Some versions of the Cúchulainn story say he was conceived there.

Labbacallee wedge tomb (Leaba Caillighe in Irish, meaning The Hag's Bed) is a large prehistoric burial monument, located 8km north of Fermoy in Co. Cork. Labbacallee is thought to have been built during the early Bronze Age, circa 1500 BC. The site is one of the largest Irish examples of a wedge tomb.

Previous - Ancient Monuments up to 1700 A.D
Next - Bronze Age Monuments